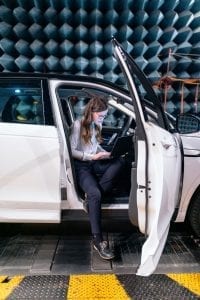 Long gone are the days that our vehicles are seen as just a mechanism to get us from point A to B. American’s car affection is well-known, and it comes as no surprise that automotive technologies continue to evolve. While some car features might seem like nonessential luxuries, many of them can prevent injury and death on the road. According to a National Highway Traffic Safety Administration (NHTSA) report on fatal motor vehicle crashes, the number of Americans dying in car accidents each year is on a downward trend. The decrease in traffic deaths comes as a result of road safety initiatives and new automobile safety features. Driver safety technology can save lives, and more consumers are prioritizing these features when purchasing new cars. In this article, we’ll take a look at new and future car safety features.

Vehicle animal detection systems are a relatively new solution to a long-term problem. Crashes involving animals are common, expensive, and sometimes even fatal. AAA car accident data shows that every year, deer alone cause an average of 1.5 million car accidents. Audi, BMW, Mercedes-Benz, and Volvo have started implementing technologies to prevent these types of crashes. These systems utilize infrared cameras and radar detection to recognize animals that could end up in drivers’ paths. The technology then responds – applying the brake system to stop or slow the car – to prevent and reduce the severity of crashes.

Many car safety features will soon include active health monitoring. Ford has previewed plans to introduce seat belt and steering wheel sensors that track drivers’ vitals. These sensors detect problems like heart attacks and then use integrated vehicle technology to pull over and alert medical personnel. This will increase safety for drivers and others on the road.

Advanced driver assistance systems (ADAS) can prevent driver, passenger, and pedestrian deaths. The systems utilize sensors and cameras to alert drivers about possible dangers, and in some cases, take control of the car. ADAS are common across most 2020 vehicle models, and some of these features are making cars more autonomous. Features such as automatic emergency braking override drivers’ actions to help avoid collisions. Some driver override systems operate at city speeds, while others are only effective at highway speed. Companies including BMW, Honda, Subaru, Volkswagen, and Volvo are implementing these technologies.

A German auto supplier became the first company to introduce airbags for the outside of a car. In 2019, ZF Friedrichshafen AG presented its external airbags to the market. The technology utilizes sensors that detect imminent crashes and then deploy large, exterior airbags within 100 milliseconds. External airbags can protect vehicles and everyone involved. Outside airbags spread the force of collision along the length of vehicles’ side structures, reducing overall energy load and impact. This reduces damage from fender benders and other accidents.

Some vehicles are now equipped with forward-facing cameras that monitor when drivers begin crossing lane markings. Lane-centering assist (LCA) responds to this feedback by automatically centering the automobile. More than 30 automakers include LCA and other lane departure warning systems in their newest models. LCA can be particularly helpful for truck drivers and other people who spend a lot of time on the road. Drivers who are tired or losing focus are susceptible to drifting lanes, and, as a result, causing truck accidents. LCA is also helpful as a winter weather safety feature to correct drifting.

‘A-pillars’ are the vertical supports at the front of vehicles that hold the windshield in place. For decades, vehicle designers have made A-pillars denser to provide additional support if a car flips over. While this is great for safety in a rollover, they also present a blind spot and obfuscate drivers’ vision. A team of designers provided a solution: Continental’s R&D team introduced its transparent pillar prototype in 2018. The pillars give drivers a fuller view of their surroundings, making it easier for them to see pedestrians, cyclists, and other potential collision victims. While the pillars are not yet on the market, Continental has built the pillars into a Chevrolet Bolt to test the technology.

DetroitBureau. “No Car Keys? No Problem. Hyundai Rolls out Fingerprint Technology That Makes Keys as Outdated as a Landline.” CNBC, CNBC, 27 Dec. 2018, www.cnbc.com/2018/12/26/no-car-keys-no-problem-hyundai-rolls-out-fingerprint-technology.html.

Most Common Car Accident Injuries & How to Avoid Them

Most Common Car Accident Injuries & How to Avoid Them