The Roundup Lawsuit is a complex and ongoing case, and it’s important for individuals to understand the potential settlement amounts that may be available.

Roundup is a widely used herbicide that has been the subject of numerous lawsuits alleging that its active ingredient, glyphosate, can cause cancer. Legal action has been taken against the manufacturers of Roundup, resulting in a $10 billion settlement.

Roundup Settlement Amounts will depend on a number of factors, including the strength of the plaintiff’s claim, the severity of the injury or illness, and the amount of damages sought. 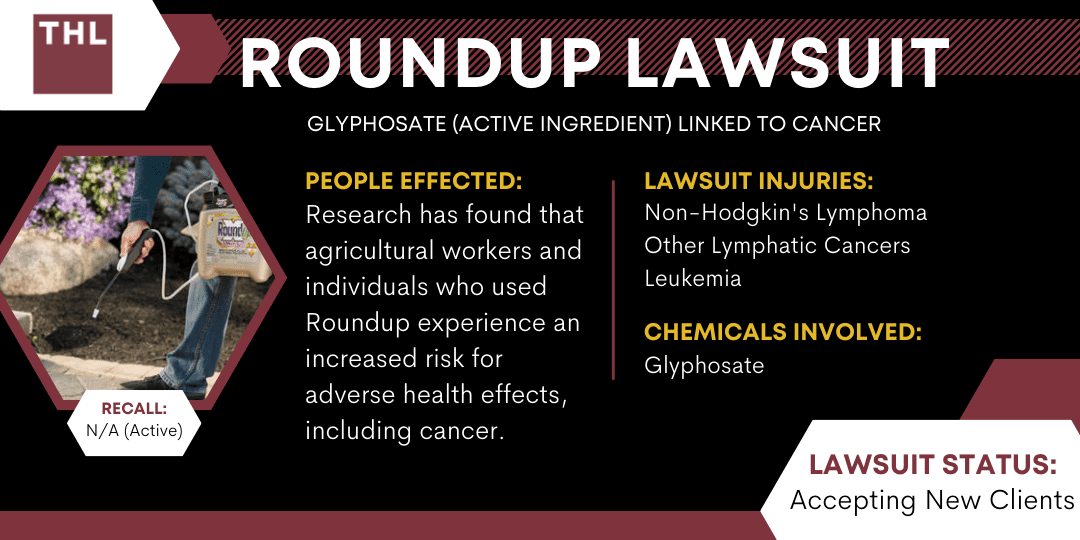 If you or a loved one used Roundup Weed Killer and subsequently developed Non Hodgkin’s Lymphoma, cancer, or other adverse health effects and Roundup related health problems, you may be eligible to file a Roundup Lawsuit.

Contact TorHoerman Law for a free consultation, or use the chatbot on this page to see if you qualify for a Roundup Cancer Lawsuit instantly.

What is the Average Payout for Roundup Lawsuit Settlements?

Though there have been several Roundup verdicts and settlements in the past, the average Roundup settlement is not consistent across every lawsuit.

Average Roundup settlement amounts for the June 2020 $11 billion settlement were over $150,000 each. This landmark settlement included $1.25 for future Roundup claims.

Our Roundup lawyers estimate that average Roundup settlement amounts fall between $5,000 to $200,000+.

As mentioned previously, the Roundup settlement amounts will depend on a variety of factors, including the strength of the plaintiff’s case, quality of evidence, severity of the injury or illness, extent of medical treatment, and amount of damages sought.

Is the Roundup Lawsuit a Class Action Lawsuit?

The Roundup lawsuit is not a class action lawsuit, but rather a multidistrict litigation (MDL).

A class action lawsuit is a legal action in which a group of individuals with a common claim against a defendant bring a single lawsuit on behalf of all members of the group.

In a class action, the court decides the legal issues for the entire group, and any damages are typically divided among all members of the group.

Multidistrict litigation, on the other hand, is a process used to consolidate multiple lawsuits that have been filed in different federal courts and involve common questions of fact.

An MDL is not a class action, as each individual lawsuit is still treated as a separate case.

However, the consolidation of the cases in an MDL allows for more efficient discovery and pretrial proceedings, as the same issues do not need to be litigated in multiple courts.

In the Roundup lawsuit, multiple individual lawsuits have been filed against the manufacturer of Roundup alleging that exposure to the weedkiller caused individuals to develop cancer.

These lawsuits have been consolidated into an MDL in order to streamline the pretrial proceedings.

Each individual lawsuit will still be decided on its own merits, and any damages will be awarded to the individual plaintiff in the case, rather than being divided among a group of plaintiffs as in a class action lawsuit.

Will My Roundup Lawsuit Go to Trial?

It is difficult to determine the odds that an individual Roundup lawsuit will go to trial, as this will depend on the specific circumstances of the case, the actions taken by the parties involved, and the state in which the lawsuit is filed.

In many cases, lawsuits are resolved through settlement negotiations or other alternative dispute resolution methods, rather than going to trial.

This can be faster and less expensive than a trial, and can also allow the parties to reach a resolution that is mutually acceptable.

However, if the parties are unable to reach a settlement or if the case is particularly complex or contentious, it may be necessary to go to trial in order to resolve the dispute.

In this situation, the case will be heard by a judge or jury, who will determine the outcome based on the evidence presented by the parties.

It is also worth noting that many Roundup lawsuits are consolidated into multidistrict litigation (MDL).

While each individual lawsuit will still be decided on its own merits, the consolidation of the cases in an MDL may affect the likelihood of a trial occurring in a specific case.

Cases have also been filed in different courts, which can also impact the likelihood of a trial.

Overall, it is difficult to predict with certainty whether an individual Roundup lawsuit will go to trial or be resolved through settlement or other means.

It is important for individuals with a claim against the manufacturer of Roundup to work with an experienced attorney to understand their options and to make informed decisions about the best course of action for their case.

What is the Roundup Lawsuit?

The Roundup Lawsuit is a legal case involving the popular weedkiller Roundup, which contains the active ingredient glyphosate. 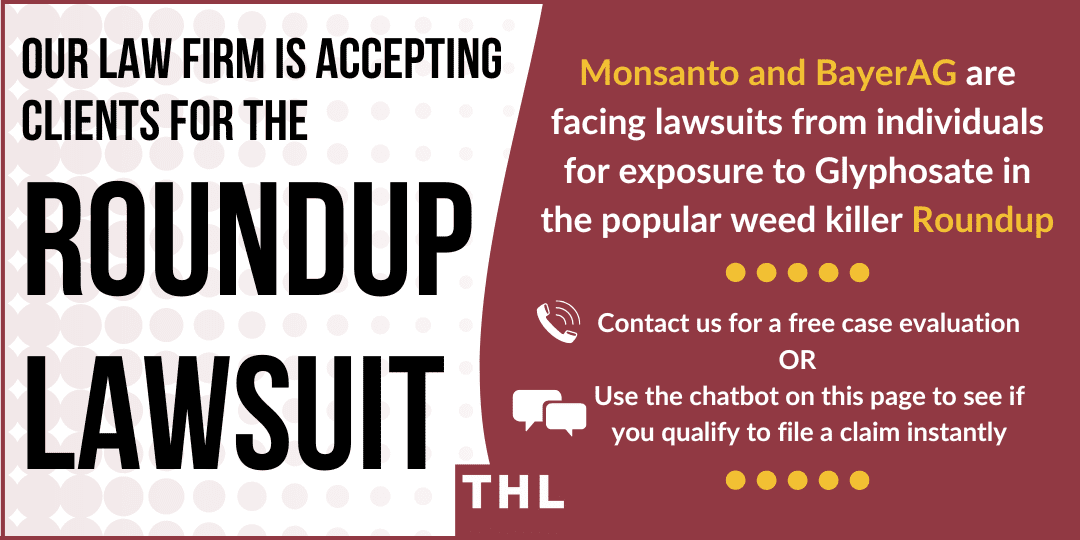 The lawsuit was brought by individuals who claim that exposure to Roundup caused them to develop cancer, specifically non-Hodgkin lymphoma.

The Roundup litigation has gained significant attention due to Roundup’s popular usage in agriculture and from homeowners, and because of decades-long concerns about the potential health effects of glyphosate.

Glyphosate is the active ingredient in Roundup and is classified as a probable human carcinogen by the World Health Organization.

What is the Current Status of the Roundup Lawsuit?

A majority of Roundup lawsuits have been settled, as part of the $11 billion Roundup settlement agreement in 2020, but lawyers are still accepting new clients for a continued litigation.

Contact our law firm if you were diagnosed with Non Hodgkin’s Lymphoma after exposure to Roundup.

You can also use the instant case evaluator on this page to see if you qualify for a Roundup Lawsuit in minutes.

There have been several research studies that have examined the potential link between glyphosate, the active ingredient in Roundup, and non-Hodgkin lymphoma. 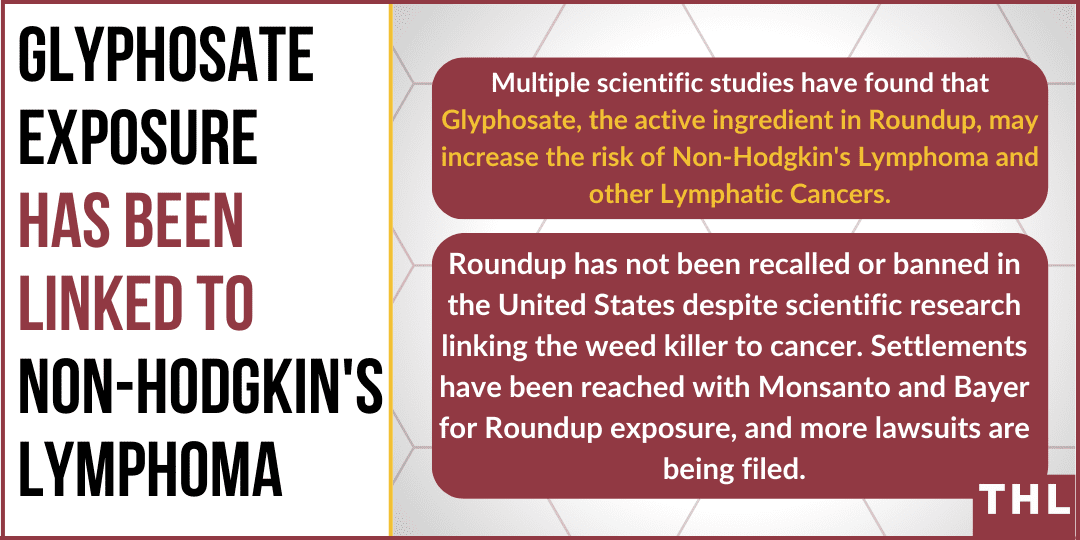 One study, published in the International Journal of Environmental Research and Public Health in 2014, analyzed data from the Agricultural Health Study, a large cohort study of agricultural workers in the United States.

The study found that individuals who were heavily exposed to glyphosate had a higher risk of developing Non-Hodgkin Lymphoma, with the risk increasing with the level of exposure.

Another study, published in the Journal of the National Cancer Institute in 2018, also found an association between glyphosate exposure and an increased risk of non-Hodgkin lymphoma.

This study from the Environmental Protection Agency (EPA) analyzed data from the U.S. National Cancer Institute’s Surveillance, Epidemiology, and End Results program and found that the risk of non-Hodgkin lymphoma was higher among individuals with high levels of glyphosate exposure.

What Health Problems are Linked to Roundup Exposure?

Glyphosate exposure has been linked to several other health problems in scientific studies.

Roundup exposure has been linked to the following health problems:

Exposure to glyphosate in Roundup may increase the risk of developing Non Hodgkin’s Lymphoma by 41%, according to a study from the University of Washington.

The Roundup Litigation is still ongoing, and lawyers across the country are still accepting clients.

However, there have been several high-profile settlements and verdicts in the case:

It’s important to note that these settlements are only a few examples of the many that have occurred in the Roundup lawsuit.

Do You Qualify for the Roundup Lawsuit?

Exposure to Glyphosate in Roundup Weed Killer has been linked to a number of health problems, including Non Hodgkin’s Lymphoma, endocrine disruption, kidney and liver problems, and other potential health problems. 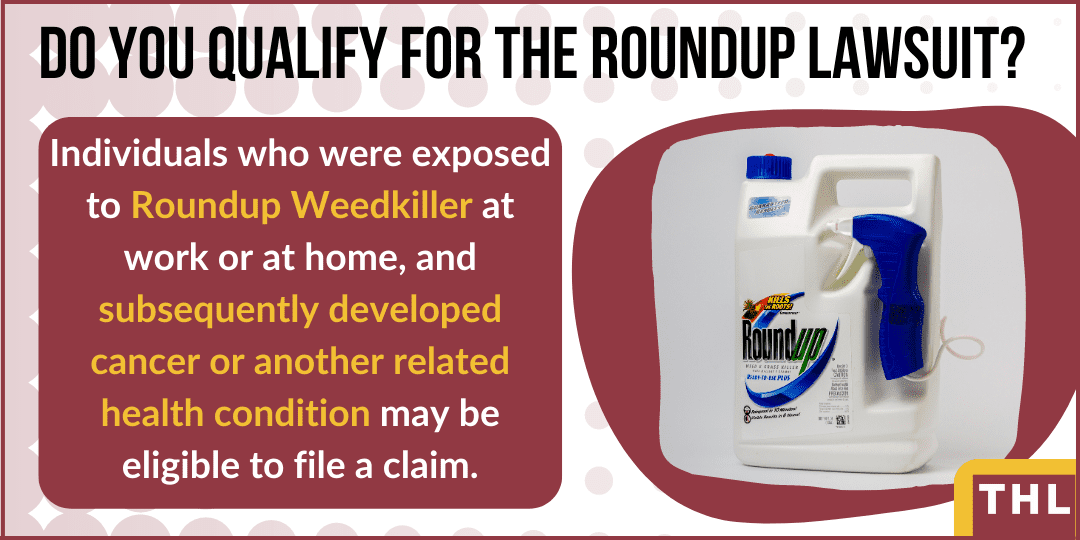 If you or a loved one have suffered from exposure to glyphosate and Roundup, you may be eligible to file a Roundup Lawsuit.

Contact TorHoerman Law for a free consultation, or use the chatbot on this page to see if you qualify for a Roundup Lawsuit instantly.

Evidence in a Roundup Lawsuit

In order to bring a Roundup lawsuit, individuals must present evidence to support their claim that exposure to the weedkiller caused their cancer.

This typically includes medical evidence of the cancer diagnosis, as well as evidence of exposure to Roundup.

Evidence in Roundup Lawsuits may include the following:

Damages in a Roundup Lawsuit

In a Roundup lawsuit, individuals may be able to claim damages for a variety of losses and injuries resulting from their exposure to the weedkiller.

These damages may include:

The amount of damages that an individual may be able to claim in a Roundup lawsuit will depend on the specific circumstances of their case and the extent of their injuries and losses.

It is important to note that the damages available in a Roundup lawsuit may vary depending on the laws of the state in which the case is brought.

TorHoerman Law is accepting clients for the Roundup Lawsuit.

Our law firm has decades of experience handling dangerous drug lawsuits and representing victims who have been injured at no fault of their own. 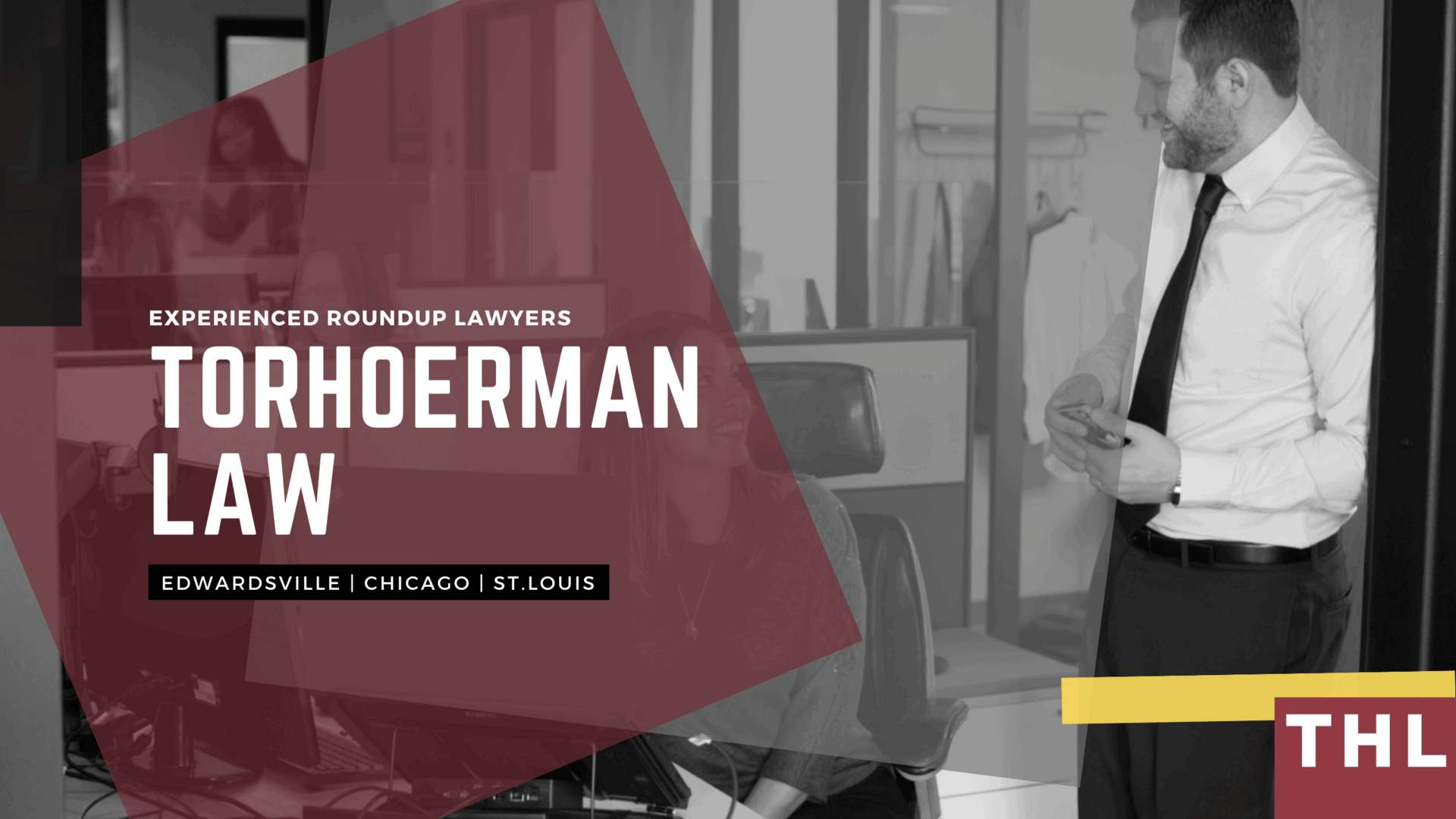 If you or a loved one have suffered due to exposure to Roundup, you may be eligible to file a Roundup case.

Contact an Experienced Roundup Lawyer at TorHoerman Law for a free consultation, or use the chatbot on this page to see if you qualify for the Roundup Lawsuit instantly.