Why Is There A Paraquat Lawsuit?

Paraquat is a chemical agent most commonly used as an herbicide.

Although it was first produced more than 130 years ago, its application as an herbicide did not become popularized until the mid-20th century.

Paraquat is now used as an herbicide agent on a range of more than 100 different types of crops.

Paraquat has been found to put those exposed to the chemical at a higher risk for Parkinson’s Disease.

What is the Paraquat Parkinson's Lawsuit Statute of Limitations in my state? 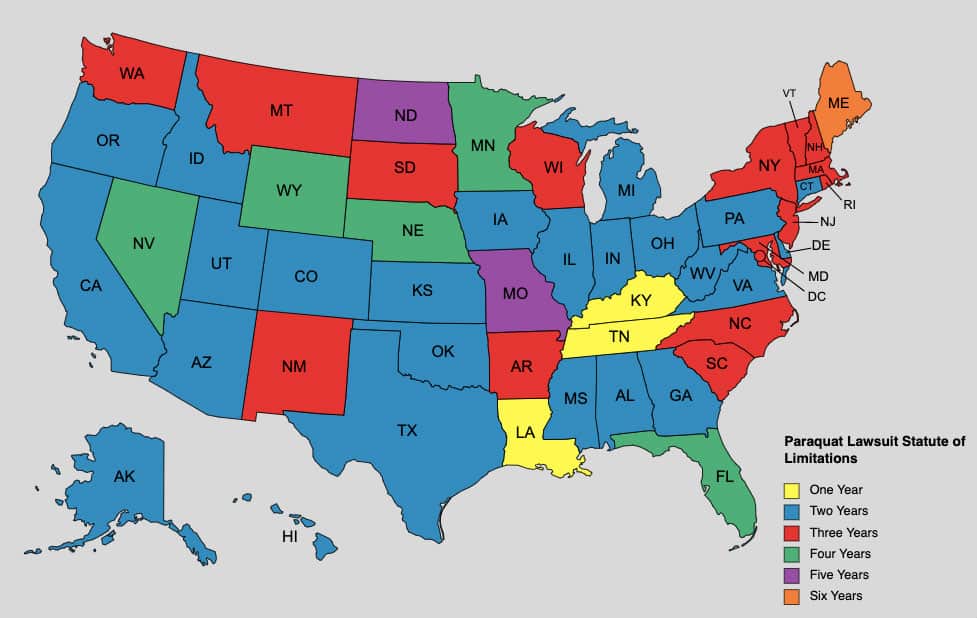 If you’ve been exposed to paraquat and subsequently developed Parkinson’s Disease, you may qualify to participate in a lawsuit.

The statute of limitations, or time period in which you’re able to file a lawsuit, differs by state and is set from the time you receive a Parkinson’s diagnosis.

The statute of limitations is NOT set from when you were exposed to the chemical.

Above is a map outlining the statute of limitations for Paraquat exposure lawsuits by state.

What is the Paraquat Parkinson's Lawsuit Statute of Limitations by state (Number of Years)?

The Paraquat Parkinson's Lawsuit Statute of Limitations is 1-6 years depending on which state you live in.

Below is a breakdown of the Paraquat Parkinson's Lawsuit Statute of Limitations for all fifty (50) states:

What To Know About The Paraquat MDL [Multidistrict Litigation]

What To Know About The Paraquat MDL [Multidistrict Litigation]