Surgical staples can be used both internally and externally on patients.

Surgical staplers and staples have been linked to a number of health risks such as infection or allergic reaction when they are defective. 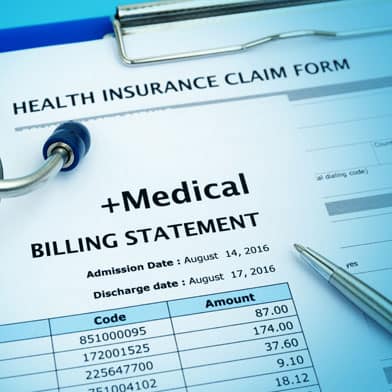 Surgical staplers are used in a number of routine surgeries, but what happens when a routine surgery becomes a matter of life and death? That is exactly what has happened for thousands of patients who have suffered potentially fatal injuries resulting from surgical stapler defects. 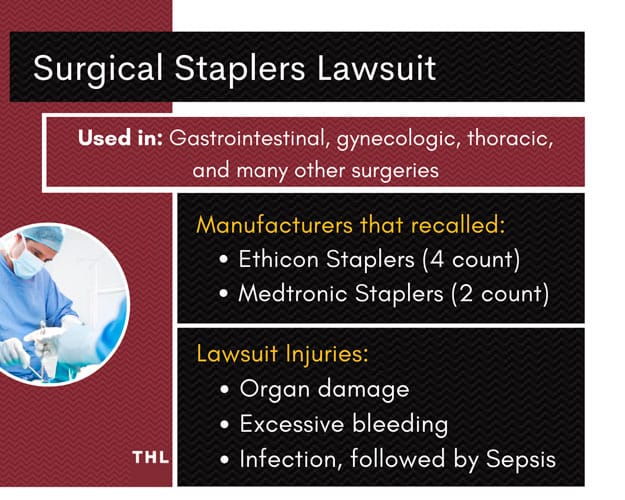 In a damaging report released by Kaiser Health News, the FDA supposedly had created and expanded a “vast and hidden repository of reports on device-related injuries and malfunctions.” Included in that hidden database are reports of injuries or deaths caused by surgical staplers.

Surgical stapler lawsuits are now being filed on behalf of patients who suffered surgical stapler injuries, unaware of the adverse effects associated with the medical devices.

Used in “gastrointestinal, gynecologic, thoracic, and many other surgeries”, surgical staplers are used both externally and internally. Removable skin staples, for external use, “close wounds under high tension, including wounds on the scalp or the trunk of the body.” Internally, surgical staples “deliver compatible staples to internal tissues during surgery.”

If you were to look up reports of injuries in the public database in 2016, 84 adverse events were reported. The FDA secret database paints a different story. Nearly 10,000 malfunctions were reported to the hidden database – an alarming difference.

In 2012, a Pennsylvania family alleged the death of their loved one was caused by a defective stomach stapler during gastric bypass surgery. The Ethicon stapler, according to the lawsuit, failed to properly seal the surgical area which then allowed the stomach contents to spill into the intestines. A jury awarded the family $5 million in damages. In May 2013, the surgical staplers, like the one used in the botched gastric bypass surgery, Ethicon Echelon 60 mm, and Echelon Flex were recalled due to the high adverse events reported.

While the issue of how injuries are reported is recent, complications as a result of surgical staplers are not and have been occurring for years. Most commonly, injuries and death are caused by:

Many surgical stapler lawsuits claim error by the surgeon caused injuries or death of patients, but there have many, many reports of defective surgical staplers that misfired provoking questions of fault.

Surgical staplers are more convenient than sutures, but it comes at the cost of having some additional risks. Many things can go wrong with the staples which lead to new injuries such as infection or allergic reaction. Furthermore, the stapler sometimes misfires or doesn’t staple with proper force. Issues with the stapler and staples have caused some patients lifelong health troubles that were completely unrelated to the procedure they were undergoing. If your health has been compromised because of a surgical stapler or staples, you may be eligible for a lawsuit.

Patients who undergo a surgery that requires surgical staples are subject to many different stapler injuries, including:

Many side effects come with getting surgery using staples: scarring, fever, nausea, infection, fatigue, or restlessness. However, the side effects of surgical staplers themselves stand out because the staples have a quick and noticeable effect on the area being operated on. It’s possible for surgical staplers to cause bleeding or to tear tissue while the surgery is still in progress, for example. If you aren’t sure whether your injuries are from the staples or something else, ask your doctor or call a surgical stapler lawyer.

The modern surgical stapler has been around for decades, but the injuries it causes weren’t addressed by the government until around 2013 during the first stapler recall. Properly designed staplers used at the discretion of skilled doctors are generally safe. Many of the faulty devices have been revised or recalled upon causing widespread injuries. If you are expecting to undergo surgery, talk to your doctor about whether they will use staples.

The report released by Kaiser Health News prompted the FDA to release a response to the public on March 8, 2019. The letter announced a plan to review the safety of surgical staplers. As part of the review, the FDA could reclassify the staplers, putting them under tighter control. Also, recommendations to surgical stapler manufacturers could be issued.

The first surgical stapler recall happened in 2013 when Ethicon brand staplers were discovered to have a reloading issue that would cause the device to stop stapling. There have been four other recalls since then as more injuries have surfaced. Attorneys are currently investigating if there are more stapler devices that ought to be recalled.

The FDA has been continually monitoring surgical staplers for years. Since the first recall in 2013, patients who have suffered injuries have helped the organization learn about faulty devices. The most recent FDA recall was in late 2019, although the lawsuits coming in against surgical staplers are expected to change that soon. You can read about the latest surgical stapler FDA recalls on this page.

Which Surgical Staplers Have Been Recalled

The FDA has recalled the following staplers:

Surgical staplers are primarily manufactured by two companies – Medtronic, and the organization’s subsidiary Covidien, and Ethicon. The former acknowledged they had an exemption that allowed them to report adverse events to the FDA privately. Ethicon, on the other hand, has never used the reporting exemption. Yet, Medtronic has been labeled the market leader in surgical staplers. The exemption has led many to believe this provides manufacturers, Medtronic specifically, an advantage.  By privately reporting adverse events, manufacturers can promote their products as a safer alternative.

FDA spokesperson, Deborah Kotz, confirmed that any device manufacturer can request an exemption.

The bigger concern is the realization that a hidden database established by the FDA years ago exists. The database essentially allowed adverse events, including deaths, to go unnoticed by doctors and patients alike for years. Since 2016, 1.1 million adverse events, either injuries, deaths, or malfunctions, have been reported to the hidden, internal database instead of being publicly acknowledged. Even former FDA deputy commissioner, Dr. Robert Califf, was unaware of the existence of such a database.

If only evaluating adverse events reported to the public Manufacturer and User Facility Device Experience (MAUDE), surgical staplers would appear safe to use, even efficient, for external and internal usage. But, the hidden database depicts otherwise. Along with hidden adverse reports related to the surgical stapler, the hidden database includes “about 100” other medical devices with similar reporting exemptions.

According to Larry Kessler, a former FDA official, the database was created to avoid under-reporting and alleviate the time it took to review reports of similar context. Device manufacturers would apply for “exemption” status to avoid reporting certain events to MAUDE. As part of that exemption status, the manufacturers would keep track of any injuries or deaths and on a regular basis, either each quarter, half-year, or year, report the events to the FDA via spreadsheet.

The program, launched in 2000, originally only included a few devices and was made public, but it has since grown in both size and secrecy.

As part of the Kaiser Health News report, Freedom of Information Act requests were filed in September 2018, but none have been fulfilled yet. The FDA cited the lack of urgency for delaying the response. Requests can take up to two years to fulfill.

Since the damaging report was released, the FDA has announced it is ending the program that hid reports of medical device malfunctions and injuries from the public. In addition to the ending of the program, the FDA will be releasing past reports to the public within weeks.

Manufacturers that have exemption status are largely unknown, but the FDA did confirm exemptions have been used for mechanical breathing machines, balloon pumps, pacemaker electrodes, pelvic mesh, MitraCLip, and implantable defibrillators.

The lack of transparency has likely put many individuals at risk. Without a clear picture of the number of injuries and deaths a device has caused, doctors unwittingly conclude that a particular device is safe for consumer use. Unbeknownst to the doctor and patient, the risk is much, much higher than predicted.

In terms of the surgical stapler, the FDA will evaluate its safety, but for the millions of people affected by the internal, hidden database, justice will not be achieved until all of the devices are evaluated for safety.

Dr. Michael Carome, director of the Public Citizen Health Research Group said, “It’s just another example of a flawed oversight system,” he said, “bent toward making it easier for industry rather than making protection of public health the primary goal.”

You should find a lawyer who is experienced in both personal injury lawsuits and in defective product lawsuits. You should feel comfortable asking your potential surgical stapler lawyer as many questions as you deem necessary for making a final decision. Ask about their experience, their fees, the familiarity with the case, etc.

Your state statute of limitations bars the amount of time you have to take legal action after first being injured or discovering your injury, so do not hesitate to take the first initial step of hiring a surgical stapler lawyer.

At TorHoerman Law, we work on a contingency fee basis for all surgical stapler lawsuit clients – so, we don’t get paid unless our clients do.