ARC airbag inflators are in numerous vehicles manufactured in the past decade including several models of General Motors (GM), Ford, Volkswagen, Hyundai and Kia vehicles. These vehicle manufacturers are also named in lawsuits. 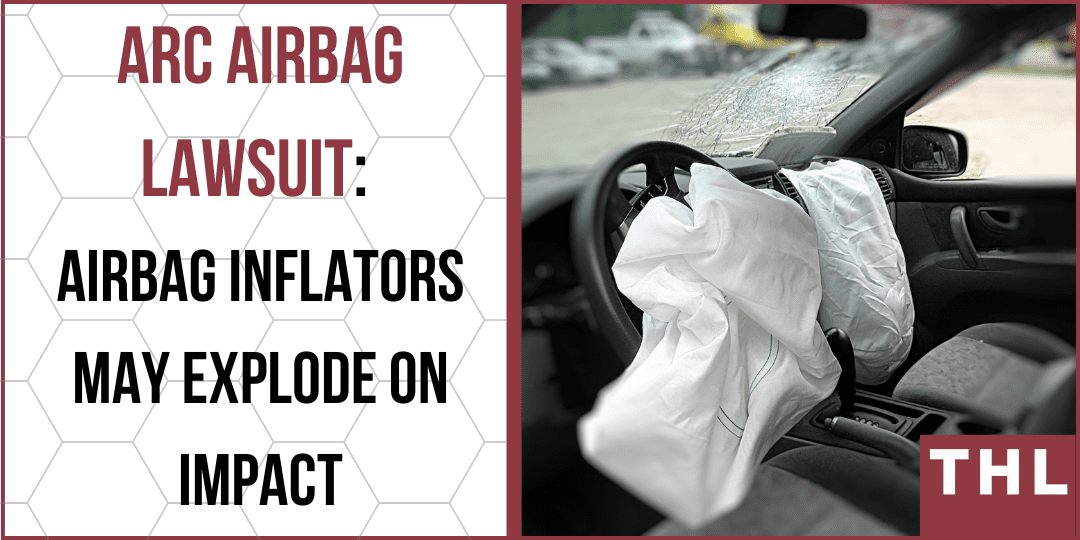 If you or a loved one have suffered injuries related to ARC Automotive’s defective inflators, you may qualify for an ARC Airbag Lawsuit.

If you’re considering filing an ARC Airbag Lawsuit, you likely have questions. Below, we’ll discuss these lawsuits in further depth and likely answer many of the questions you have.

Contact the attorneys at TorHoerman Law for a free consultation or use the chatbot on this page to see if you qualify for legal action instantly.

What Vehicles Have ARC Airbag Inflators?

Among them all, here are some of the most notable car manufcaturers who use ARC airbag inflators in their vehicles:

The National Highway Traffic Safety Administration (NHTSA) estimates that there are over 51 million vehicles on the road with ARC airbag inflators installed.

Despite the National Highway Traffic Safety Administration (NHTSA) investigating ARC airbag inflators since July 2015 and numerous injuries and deaths, ARC Automotive has not faced a sweeping recall for its products.

Recalls were announced for certain model years of the:

There have been three (3) recalls on ARC airbag inflators since the NHTSA investigation started in 2015.

What is the ARC Airbag Lawsuit?

If you or a loved one have suffered injuries from a defective ARC air bag inflator, you may qualify for an ARC Airbag Lawsuit.

The suit alleges that ARC Automotive and other auto manufacturers did not warn consumers of the risk for air bag inflators, particularly the metal inflator canister, exploding during a frontal air bag deployment.

Tens of millions of passenger vehicles manufactured in the past decade contain airbag inflator parts made by ARC Automotive. 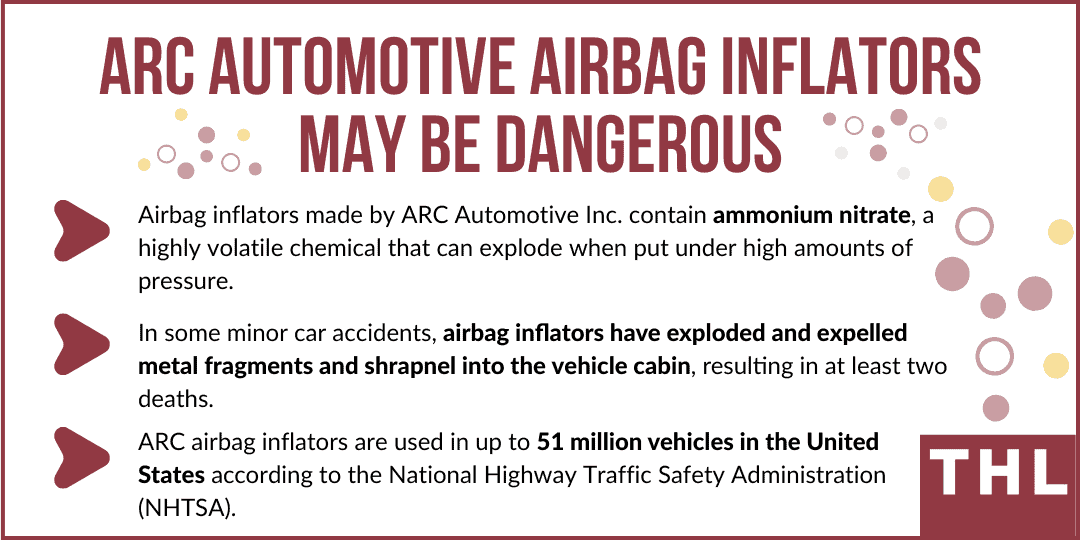 The air bag inflator is a metal canister that is filled with ammonium nitrate gas, and when initiated, gas is released into the airbag causing it to expand.

When deployed, these ARC inflators can potentially explode and send metal fragments and metal shrapnel into the passenger compartment or vehicle cabin.

These ruptures resulted in major injuries and at least two deaths in vehicle occupants.

The ARC airbag inflator defect has been found on both the driver's side and passenger side of certain vehicles.

Ammonium nitrate is a chemical compound used in a number of industries, including for fertilizers, propellants, explosive materials, herbicides, manufacturing other chemicals, and much more.

While ammonium nitrate is non-flammable, but when put under extreme conditions of heat and pressure, the chemical is highly combustible.

Ammonium nitrate was the ignition source of the infamous Beirut Blast in August 2020 that killed over 200 people and crippled the infrastructure and economy of Lebanon's capital city.

Ammonium nitrate was used for decades in airbag inflators as a cheap and simple propellant.

In recent years, the airbag industry has largely chosen to use other gases, such as guanidine nitrate, in place of ammonium nitrate due to the potential risks it poses.

The defects present in ARC inflators are substantially similar to those experienced with the Takata airbags that claimed the lives of at least 19 people in the United States.

Lawsuits over the Takata airbags defects were brought and settlements totaled over $1 billion.

A proposed class action lawsuit was filed in the US District Court: District of South Carolina in August 2022.

The proposed class action lawsuit claims that car owners did not receive warning that their vehicles contained defective ARC airbags and air bag inflators, leading to monetary losses concerning the value of vehicles, loss of use of their vehicle, and other costs associated with the defective airbags.

Another suit states that hybrid airbag inflators that use ammonium nitrate as a propellant and expels shrapnel during airbag deployment.

The suit states that internal testing from ARC Automotive and other regulatory bodies who studied accident reports should have informed the defendants of the issues.

The class action lawsuit, filed in June 2022 in the US District Court: Northern District of California, names the following companies as defendants:

NOTE: TorHoerman Law is NOT involved in the ARC Airbag Class Action Lawsuit

There have been at least two deaths reported in accidents involving the ARC air bag inflators:

Countless others have been injured by the faulty airbag inflators.

The NHTSA has been investigating the defects and issuing recalls to singular vehicle manufacturers for some years now, but the limited recalls have not begun to address the seriousness of the issue at hand.

The NHTSA has said that the ongoing investigation into ARC airbags and inflators is not over.

If you or a loved one have been injured by a faulty ARC Airbag Inflator, you may qualify for an ARC Airbag Lawsuit. 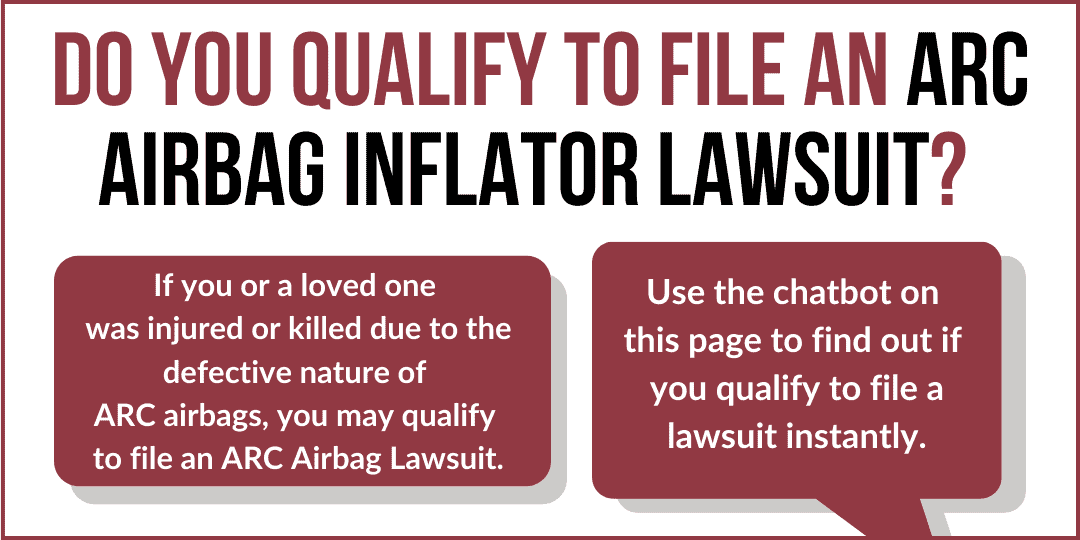 ARC Airbag Lawsuits may also be brought in the form of wrongful death lawsuits if a death occurred as a result of an airbag explosion.

These airbags can cause a great amount of harm and even death, and the fact that ARC Automotive has not faced significant pressure in addressing the issue is dangerous for consumers.

A number of potential injuries can result from exploding airbag inflators.

Metal shrapnel, pieces of the steering wheel and steering column, and other metal fragments can cause punctures, lacerations, broken facial bones, and even death.

If you've been injured by metal shrapnel or fragments from an ARC airbag, retain your medical records, vehicle information, and any other documentation pertaining to the incident and contact a personal injury lawyer.

Our team of expert product liability lawyers understand the severity of the situation when it comes to an ARC Airbag Lawsuit.

When you're operating your personal vehicle, you expect it to keep you safe when an accident occurs.

This is exactly the opposite of what the ARC Airbag Inflators do.

Even minor accidents in vehicles manufactured with ARC airbags can result in severe injuries and even death. 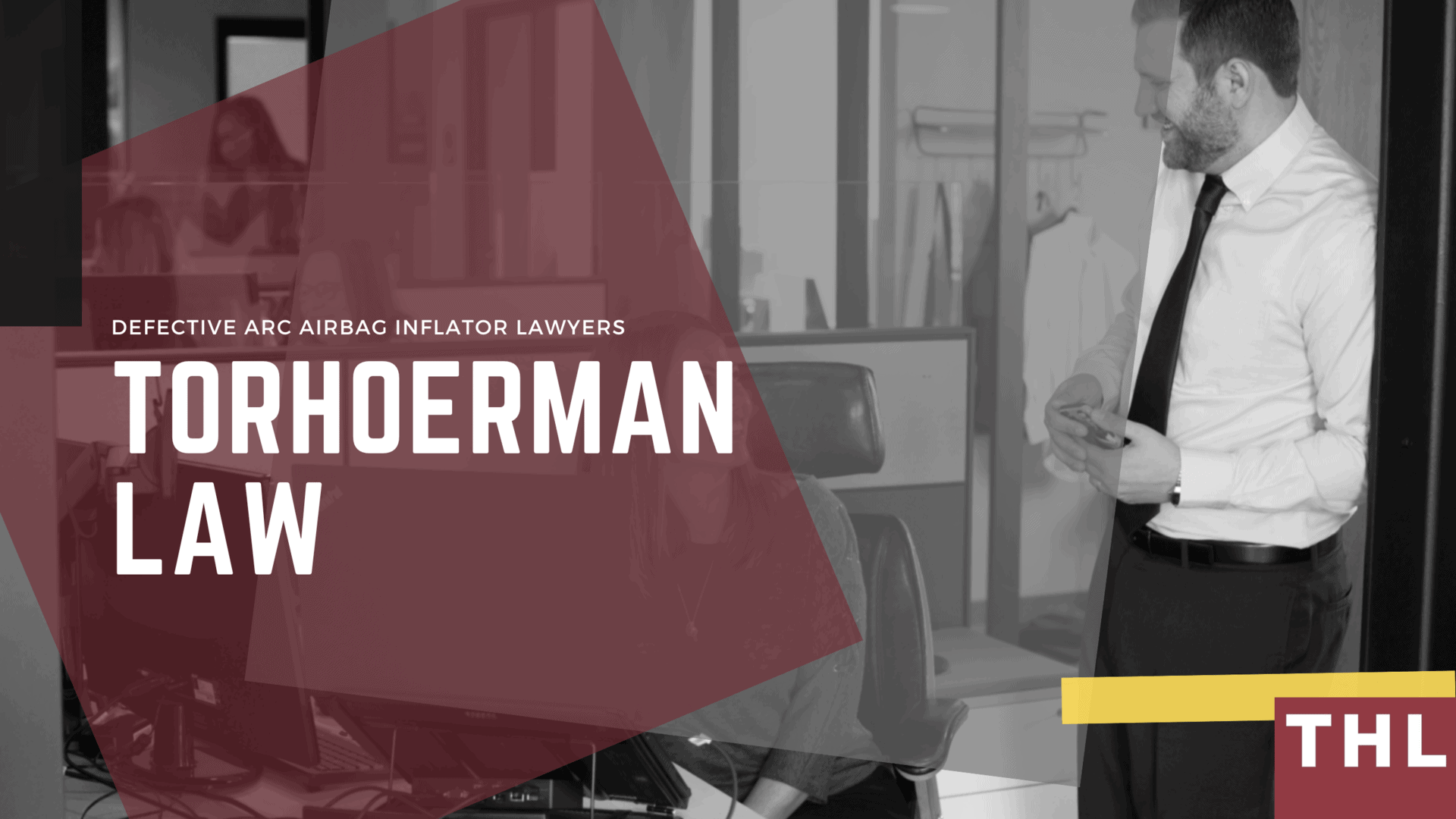 If you or a loved one was injured or killed due to the defective nature of ARC airbags, you may qualify to file an ARC Airbag Lawsuit.