The New Truth About Vaping: Is E-Cigarette Regulation Working?

News » The New Truth About Vaping: Is E-Cigarette Regulation Working?

For the past few years, the safety and potential adverse health effects of e-cigarettes and vaping products has been in contention, with manufacturers claiming their products to be a safe alternative to traditional cigarettes while scientists say they could be just as dangerous. From claims of helping decrease cigarette smoking (by being a “healthier” alternative) to potential health risks to the individual health of users, c-cig safety has been heavily discussed throughout media, scientific & legal communities.

To combat the potential negative health impacts of vaping, the FDA has set new regulations in recent years to make e-cigarettes safer.

But are these regulations working?

Unfortunately, there is a range of information, both biased and unbiased, readily available to users who are worried about vaping injuries.

Without a concise answer, many users are still left to question, “what is the true safety or harm of e-cigs?”, ” Are vapes actually safe?”, “What’s the truth about vaping and vape pens?”, & “Is E-Cigarette Regulation Really Working?”.

In this article, we aim to present the truth about vaping and provide factual, trustworthy evidence that will inform you how safe vaping really is. 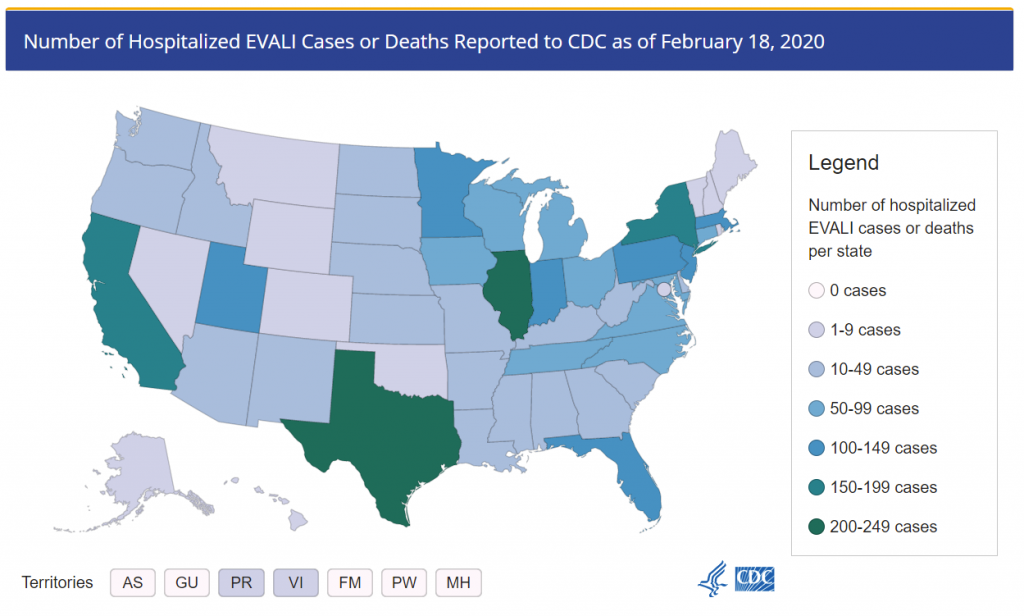 While research on vaping and E-cigarettes is ongoing, here are some facts you should know:

Given the increase in e-cigarette injuries, public health advocates pushed concerns about vaping effects to the media and the public. This, in turn, prompted the US Food and Drug Administration (FDA) to enact new regulations on the vaping industry.

Correct, the FDA has only recently placed some regulations on e-cigarettes and vaping devices. The administration didn’t review e-cigarettes before they appeared in stores nor even proposed any regulations for these devices until 2014.

Starting in 2016, the FDA began its first of several vaping interventions.

Types of Vaping Interventions and Their Efficacy 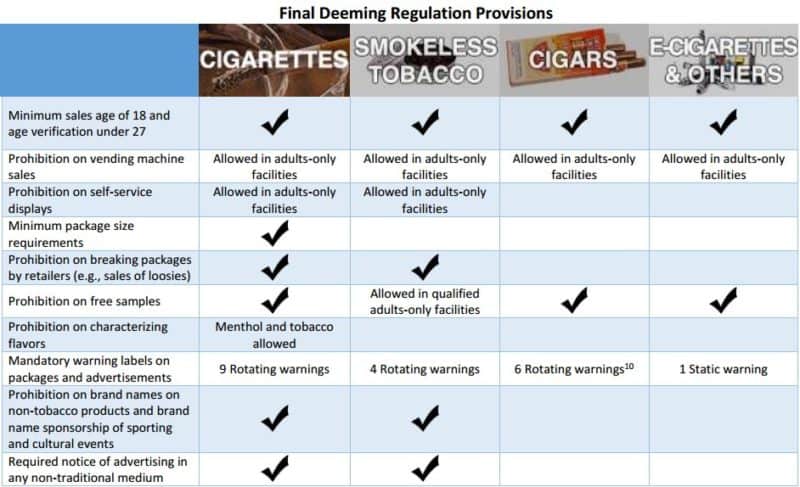 Table created by the Public Health Law Center, originally published in their document.

Signed into law in June 2009, the Family Smoking Prevention and Tobacco Control Act allows the FDA to regulate several key aspects of tobacco product sales, including manufacturing, distribution, and marketing. However, it wasn’t until May 5, 2016, when the FDA finalized an additional rule to the regulation that expanded the FDA’s authority onto electronic cigarettes and other related products.

One noteworthy rule among the new rules regarding e-cigarettes is the restriction on sales to minors (or people under 18). This allows the FDA to limit youth access to tobacco products and protect the health of teens and children looking to get into vaping. 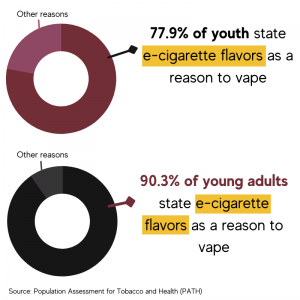 The Population Assessment for Tobacco and Health (PATH) study notes that experiencing unique e-cigarette flavors is the leading reason for youth and young adult e-cigarette usage, with 77.9% and 90.3% stating this as a reason.

Amid the high preference and widespread use of flavored e-cigarettes among those under 25, the FDA implemented a new policy prioritizing the enforcement against the sale of certain unauthorized flavored prefilled pod or cartridge-based (closed system) e-cigarettes (excluding tobacco or menthol flavors).

The federal ban on vaping products is limited to non-tobacco flavors only, so that adult smokers trying to quit cigarettes still have the option to switch to e-cigarettes. This is the original goal of the e-cigarette and the new rule helps support it while preventing and reducing youth tobacco product use. 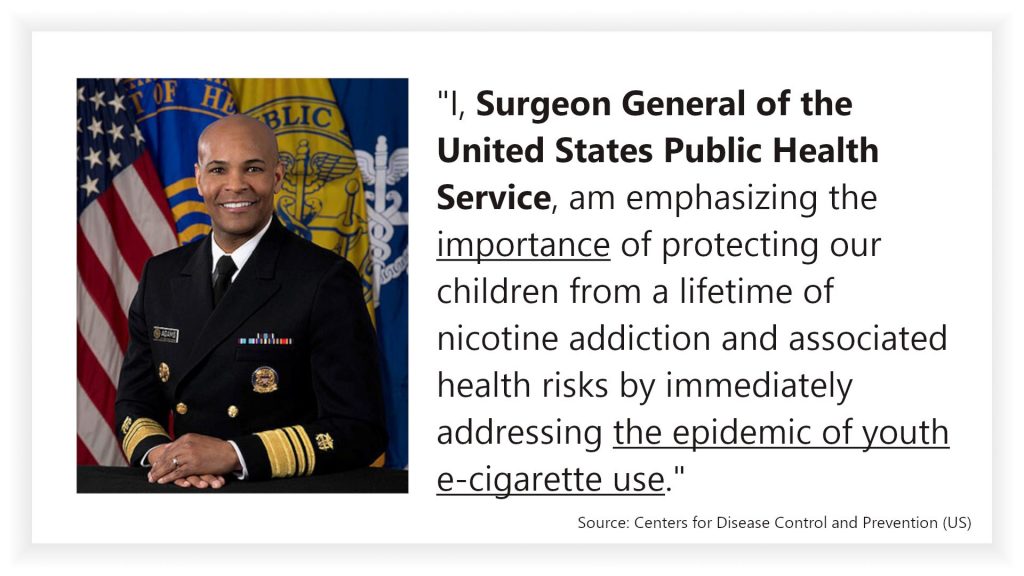 The rapid growth in popularity of e-cigarettes has also increased the number of e-cigarette lawsuits against major e-cigarette companies, especially Juul Labs Inc. These lawsuits were mainly filed by parents of youth and young adults who delved into vaping without being aware of possible side effects.

Juul Labs Inc. is the company that created the immensely popular JUUL e-cigarettes. These battery-operated pod devices can deliver an exceptionally potent dose of nicotine to their users.

Many of the e-cigarette lawsuits filed claim that JUUL pods are providing nicotine doses several times higher than allowed when compared to normal cigarettes. Higher levels of nicotine result in increased addictiveness and has led to a vaping addiction. This also poses a serious health risk as Nicotine itself is a carcinogen.

The U.S. Surgeon General has stated about e-cigarettes that there is an “e-cigarette epidemic among youth.”

It’s no surprise Juul and e-cigarette lawsuits are being filed, especially when studies have linked Juul & nicotine use to a number of adverse health risks including:

A study published in the New England Journal of Medicine in 2019 indicated a relationship between vaping and an increased risk of developing lipoid pneumonia. This is likely due to lung’s inflammatory response to the harsh chemicals found in vaping liquids. Given the results, lung injury associated with vaping has been recognized in the medical literature.

According to the study, vaping increases the risk of:

The study reveals several reasons for the increase in risk.

Researchers found in their examinations and reviews of vaping-related injuries:

The study couldn’t determine which specific vaping mechanisms are the likely cause for these lung injuries, but researchers have begun to discover new indicators, such as the discovery of lipids in the lungs which marks a lipoid pneumonia vaping link.

Should You Quit Vaping?

E-cigarettes were once sold as a healthier alternative to smoking, providing a similar experience without the serious consequences and risks of smoking. Though today it has an abundance of arguments and articles against the risks of vaping, it continues to be marketed as a way to free users of traditional cigarettes from smoking. Whether it is truly effective is still debated. Its risks, however, are no longer as unknown to the public as it was 5 years ago.

Popularity doesn’t always indicate risk adversity. Research into E-cigarettes has produced evidence that suggests that these vaping devices may have unique health harms when compared to cigarettes.

Risks of vaping harm to the individual health include:

Nicotine itself is a carcinogen, as well as a toxic chemical associated with cardiovascular, reproductive, and immunosuppressive problems. Nicotine adversely affects the heart, eyes, reproductive system, lungs, and kidneys.

If you want to avoid the negative health effects of vaping, it is recommended that you quit vaping and e-cigarette use completely.

If you or a loved one feel adverse effects from e-cigarette usage (or vaping) such as:

You should get medical attention right away! If you experience any of these symptoms within the first 15-60 minutes of vaping, call the Poison Control Center at 800-222-1222, and follow up with your healthcare provider.

So, Are E-cigs Safe?

No. With a high risk of getting a lung injury, or simply an addiction to vaping given the high levels of nicotine present, e-cigarettes are not safe. If the goal is to reduce traditional cigarette use, e-cigarettes can be useful in providing a path to quitting smoking, that is as long as you are aware of the unique risks are present in prolonged vaping.

FDA regulation has only reduced the number of people who can get harmed (underage users and those seeking the flavored vape), but they have yet to make e-cigarettes themselves safer for those looking to reduce or quit smoking. FDA intervention is also late to the party as many underage and adult users are already addicted to vaping or suffer from adverse medical conditions. With many lawsuits into vaping and health officials speaking out about the risks of vaping, we hope that e-cigarettes soon become regulated enough to reduce harm among its users.

Centers for Disease Control and Prevention. (2020). Outbreak of Lung Injury Associated with the Use of E-Cigarette, or Vaping, Products. U.S. Department of Health and Human Services. https://www.cdc.gov/tobacco/basic_information/e-cigarettes/severe-lung-disease.html#latest-outbreak-information.

“Some E-cigarette Users Are Having Seizures, Most Reports Involving Youth and Young Adults.” U.S. Food and Drug Administration, 10 April 2019, https://www.fda.gov/tobacco-products/ctp-newsroom/some-e-cigarette-users-are-having-seizures-most-reports-involving-youth-and-young-adults

Surgeon General’s Advisory on E-cigarette Use Among Youth | Smoking & Tobacco Use | CDC,  https://www.cdc.gov/tobacco/basic_information/e-cigarettes/surgeon-general-advisory/index.html