If you or a loved one used Truvada in conjunction with other HIV medications and subsequently suffered a serious injury, you may be eligible to participate in a Truvada lawsuit to gain compensation for your losses.

Truvada lawsuits have been filed, claiming that the drug causes kidney problems and bone loss.

Lawsuits against the drug’s manufacturer, Gilead, also claim that safer drugs were withheld to maximize profits from Truvada.

You are not alone on the road to recovery.

Contact TorHoerman Law and learn how our firm can serve you.

Do I qualify for a Truvada lawsuit?

You may qualify for the Truvada lawsuit if you were prescribed Truvada to treat HIV and subsequently were diagnosed with:

How much can you get from Truvada lawsuit?

The value of your Truvada lawsuit depends on the total damages that you incurred as a result of your injuries related to Truvada.

These can include, but are not limited to:

What is the lawsuit against Truvada?

The lawsuit filed against Truvada manufacturer Gilead Sciences, Inc. claims that Truvada users were unknowingly put at risk of a number of injuries including kidney injuries and bone injuries.

Truvada has been linked to a number of adverse health risks including kidney injuries and bone injuries.

Truvada lawsuits are still being filed and lawyers across the country are still accepting cases.

If you have suffered kidney injuries or bone loss, you may be eligible to file a lawsuit. Contact our law firm or use the chatbot on this page to get a free and instant case evaluation. 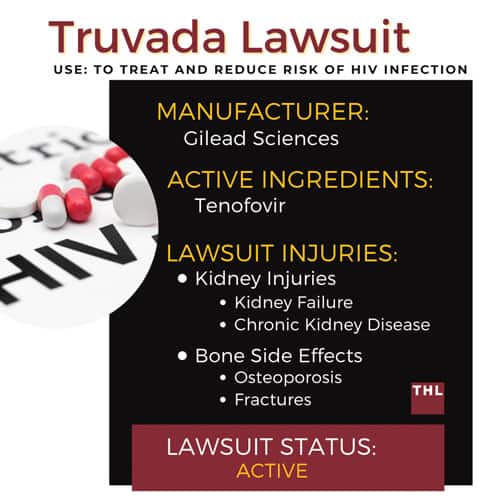 Truvada is used for 2 purposes:

It is very important Truvada is taken with other HIV medications, otherwise, it will be less effective than intended as an HIV treatment.

Manufactured by Gilead Sciences, the drug was approved for HIV prevention in July 2002.

Has Truvada Been Recalled?

As of now, Truvada is still available and has yet to be taken off the market.

Despite the evidence linking the drug to several serious injuries, the FDA has not mandated a recall of the product.

If you are currently taking Truvada, talk to your doctor about other treatment options.

Before stopping use, consult with your doctor to make sure that it is safe.

While Truvada is the most popular, there are 5 TDF drugs that can cause the serious side effects mentioned below:

HBV can be an opportunistic infection (OI) of HIV.

Truvada manufacturer Gilead Sciences has faced criticism for delaying the release of TAF drugs to boost the sales of TDF HIV drugs.

TDF drugs have been found to cause serious side effects that can cause kidney and bone injuries to individuals already suffering from HIV.

TAF drugs have been known to be a safer alternative that do not pose the same risks as TDF drugs.

TAF drugs possess a smaller concentration of the main ingredient, tenofovir, in the blood.

The smaller concentration can prevent it from accumulating in the blood and kidneys.

Truvada manufacturer Gilead Sciences has faced criticism for delaying the release of TAF drugs to boost the sales of TDF HIV drugs.

Despite the knowledge of a safer, alternative drug, Gilead did not release TAF drugs until recent years.

Their negligence has put many at risk when there could have been a better alternative.

Critics allege Gilead Sciences purposely didn't bring a TAF drug to the market in order to maximize the profits of Truvada.

In addition to bringing in millions of dollars to the manufacturer, the out-of-pocket cost for many consumers has skyrocketed.

At nearly $2,000 for a 30 day supply, the outrageous costs have prevented many from continuing the use of Truvada.

Truvada injuries and long-term effects include, but are not limited to:

In the early stages, you may be unaware that your kidneys are beginning to fail.

Signs of kidney failure include:

A Truvada lawsuit has been filed on behalf of individuals who were precribed the TDF drug and subsequently suffered injuries related to the drug.

The lawsuit is filed against Truvada manufacturer Gilead Sciences and other manufacturers.

Plaintiffs in the lawsuit claim that Gilead Sciences failed to warn consumers of the risks associated with TDF drugs.

In addition, Plaintiffs allege that in order to maximize the profits of Truvada and TDF drug sales, Gilead Sciences delayed research, testing, and production of TAF drugs as a treatment for HIV.

Do I Qualify for a TDF Lawsuit?

If you or a loved one was prescribed Truvada or another TDF medication and were subsequently diagnosed with a kidney or bone injury, you may qualify to participate in the Truvada lawsuit.

You can also use our chatbot to receive a free, instant online case evaluation to find out if you qualify for a Truvada lawsuit right now.

If you are considering filing a Truvada lawsuit, there are a few considerations and steps you will need to take before taking legal action.

The two (2) important steps that you should take before filing a TDF drug lawsuit are:

The first step you should take is mitigating your injuries & other damages incurred as a result of Truvada.

In order to mitigate your damages, it is best practice to seek proper medical treatment right away.

Be sure that your doctor diagnoses your injuries and follow any of your doctor's orders to the best of your abilities.

You should consider discontinuing use of Truvada, but not until you have received permission from your doctor.

After being diagnosed, do everything in your power to limit the financial, physical, and emotional damages resulting from your injuries.

This is an important step to building a good, honest case.

Next, you should seek legal consultation from an experienced attorney.

You can contact TorHoerman Law for a free, no-obligation legal consultation to discuss your legal options today.

Statute of limitations bar the amount of time you have to take legal action after you have suffered an injury, so it is important that you seek legal assistance as soon as possible so that you can begin the process of filing a Truvada lawsuit.

Benefits of Hiring a Truvada Lawyer

There are many benefits of hiring an injury lawyer to represent you.

Your Truvada lawyer will work to build a strong case for you in order to maximize the amount of compensation that you receive for your injuries and other losses.

They will do so by gathering evidence to prove liability falls on the manufacturer, Gilead.

Your attorney will assess damages associated with your injuries to determine an appropriate value of your case.

Your Truvada lawyer will then navigate through the complex civil litigation process to fight for compensation for those damages that you incurred.

Let us handle the litigation process so that you can focus on what really matters, recovery.

TorHoerman Law is comprised of a team of dedicated attorneys with over 100 years of combined litigation experience who are ready to fight on your behalf.

With over $4 B in awarded verdicts and negotiated settlements, our results speak for themselves.

Our goal is to help those who have been injured because of the negligence of another.

In this case, Gilead knew of the risks involved and failed to bring a safer, alternative drug to market, and people have suffered from serious side effects as a result.

We want to hold Gilead accountable for their negligence in a Truvada lawsuit.

If you have suffered from adverse effects from a TDF drug such as Truvada, contact TorHoerman Law for help.

If you believe you have a claim against Gilead and may qualify for a Truvada lawsuit, contact our law firm for a free consultation.

You may qualify for compensation.