For victims of neglect, injury and abuse

If you or a loved one has been the victim of a injury or abuse in a nursing home, contact an experienced nursing home abuse lawyer from TorHoerman Law for a free, no-obligation case consultation today.

You can also use our chatbot to receive a free, instant online case evaluation to find out if you are eligible to take legal action now.

If you are the victim of abuse, please report the abuse to the authorities right away.

What are the signs of nursing home abuse?

Nursing home injuries are likely much more prevalent than you may think.

Thousands of senior citizens suffer from negligent care each year.

Some obvious signs to look out for include:

How long does it take to settle a nursing home lawsuit?

The timeline of a nursing home abuse lawsuit can vary, but you can generally expect them to take at least 18 months to resolve.

The exact length will depend on the discretion of the court and the strength of the case.

Every state has a statute of limitations and it’s easier to gather evidence when the abuse is still recent.

Can I sue a nursing home for neglect?

You may be eligible for compensation if you have received negligent care that has caused an injury or illness that you would not have otherwise have suffered.

Also, you can raise a claim on behalf of a victim who is unable to act for themselves legally.

What Is a Nursing Home Injury?

Nursing home injuries happen much more often than you may think, and broken hips are just the beginning of it.

Seniors in these facilities already need special care for their existing conditions, so new injuries are particularly threatening to their long-term health.

If you or a loved one has suffered injuries at a care center, consider speaking with a nursing home injury lawyer about how you can receive money for your losses.

Injuries encompass all forms of harm or illness.

Here are six (6) of the most common types of nursing home injuries:

1. Falls and fractures in nursing homes

Falls are the most common way that seniors are injured.

Falling out of bed, down the stairs, or on uneven surfaces can easily cause broken bones or head trauma.

The spinal cord plays an important role in the body’s ability to move.

Damage to the spinal cord can thus lead to paralysis, breathing issues, and incontinence.

Bedsores are a skin condition that results from staying in the same position in bed for too long.

They begin as dry or irritated skin but can evolve into blisters, open cuts, and discoloration.

A concussion is when an impact on the head causes the brain to be temporarily jolted out of its normal position.

Symptoms of a concussion include:

For elder citizens, this injury is most likely to happen from a fall.

6. Negligence and abuse in nursing homes

Negligence occurs when a senior’s caretaker fails to adequately take care of them.

This could be forgetting to give them their medication, ignoring signs of illness, or carelessly letting them wander, among other neglectful behaviors.

Abuse is when a caretaker intentionally harms their client.

If you aren’t sure how the law would interpret your injury, a nursing home injury lawyer can provide answers.

You may need to contact an intentional tort lawyer if you or a loved one suffered abuse in a nursing home. 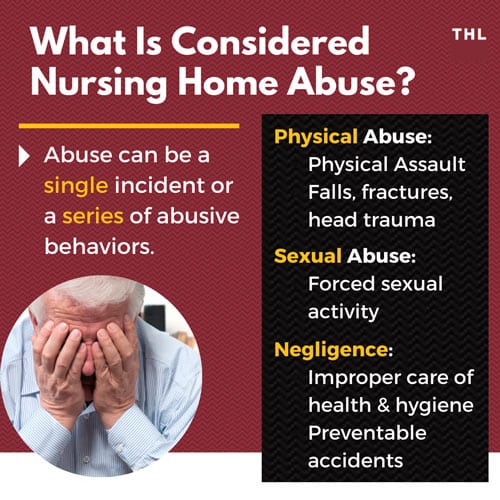 Each year, thousands of elder seniors claim to have suffered abuse in their care facilities.

Abuse can be physical, sexual, emotional, or financial.

Nursing home abuse can be a single event or a series of abusive behaviors.

Your attorney will examine anything that may have caused or worsened the injury.

It’s important that if you witness or experience a form of nursing home abuse, you reach out to authorities as soon as possible.

You’re encouraged to call the police, your state’s ombudsman, or the Adult Abuse Hotline.

How Common Is Nursing Home Abuse?

These nursing home injury statistics show how big the problem is:

Are you unsure whether your injury counts as abuse, negligence, or something else?

Abuse and negligence often overlap, and both can go to court.

Don’t disregard it just because you don’t know.

The following examples should help clarify elder abuse, negligence, and generally what kinds of injuries end up in court:

Medical negligence, similar to medical malpractice, is when a medical professional ignores the standard of care that they’re expected to follow in their position.

It could be a doctor lying about their patient’s diagnosis, a surgeon performing unnecessary surgeries, or a radiologist ignoring lab results, for example.

Medical negligence can also take place in a nursing home.

If you think medical negligence is taking place in a nursing home, you may want to ask a nursing home injury lawyer the best way to intervene.

They are highly preventable which means the plaintiff or the victim’s family immediately looks to the staff for an explanation.

In some cases, a nursing home will actively try to hide the presence of bedsores in their facility.

Situations like this are especially damaging for those who are in charge.

If you or someone you know lives in a nursing home and is beginning to suffer from a skin condition, it could be the start of bedsores.

Immediately ask the staff about it.

Their answer is crucial in preventing further illness and for evidence in a potential lawsuit.

The main purpose of a nursing home is to take care of elder individuals who can no longer care for themselves.

Employees, therefore, have many responsibilities with their clients.

Some responsibilities include, but are not limited to:

But whose fault is it when something goes wrong?

Liability depends on the circumstances.

If evidence shows the injury to be the result of, say, the carelessness of a staff member, then a case against the nursing home might be viable.

The nursing home may also be liable if they failed to uphold certain responsibilities and it led to an injury.

For example, if an elder person takes a pill that ultimately harms them, it could be the maker of the pill who’s liable rather than the nursing home.

The same applies to faulty medical equipment such as a walker or IV bag.

It’s best to consult a nursing home injury lawyer about who is liable for your injury.

How To File A Nursing Home Abuse Lawsuit

You can begin by calling a nursing home abuse lawyer and telling them what happened.

They’ll figure out if a nursing home abuse lawsuit is the right option for you.

Hiring a personal injury lawyer is an important step in the process of filing a nursing home abuse lawsuit.

After hiring a nursing home abuse lawyer, your lawyer will begin to gather evidence for your case.

Names, photos, videos, and receipts are all helpful pieces of evidence that you may be able to acquire, but if not, your nursing home abuse lawyer will handle it.

Your nursing home abuse lawyer will then examine the facts and evidence to determine liability for you or your loved one’s injuries.

The total cost of these injuries is the plaintiff will demand both compensatory damages and punitive damages.

You, as the plaintiff, will seek compensation from the liable party to cover these damages.

Your nursing home abuse lawyer will stress this, but it is important to mitigate injury by seeking medical treatment right away and following your doctor’s orders.

This is an important part of building a strong nursing home abuse lawsuit argument.

Your state’s statute of limitations bars you from taking legal action after a specific amount of time has passed, so do not hesitate to seek legal aid from a nursing home abuse lawyer as soon as possible after the incident.

How Long Does A Nursing Home Lawsuit Take To Settle?

The timeline of a nursing home lawsuit is variable, but you can generally expect them to take at least 18 months to complete.

The exact length will depend on the discretion of the court, the strength of the case, and whether it’s criminal or civil.

It’s always ideal to begin the civil lawsuit process as soon as possible.

Every state has a statute of limitations, and it’s easier to gather evidence when the abuse is still recent.

Your nursing home injury lawyer will guide you through each phase of the lawsuit.

We know the difficulty of confronting the perpetrators while trying to recover from trauma.

If you’ve suffered in any of the ways described, you can contact us at (888) 508-6752 or use the chatbot below for a free instant online case evaluation.

You should also strongly consider reporting the abuse at the Adult Abuse Hotline at (800) 222-8000.

So, contact a nursing home abuse lawyer at TorHoerman Law today to discuss your options, free of charge and no obligation required.