The Topamax Lawsuit (specifically the Topamax Birth Defects Lawsuit) alleges that Janssen Pharmaceuticals, the manufacturer, failed to warn women and doctors about the drug’s risk for causing birth defects and other side effects. 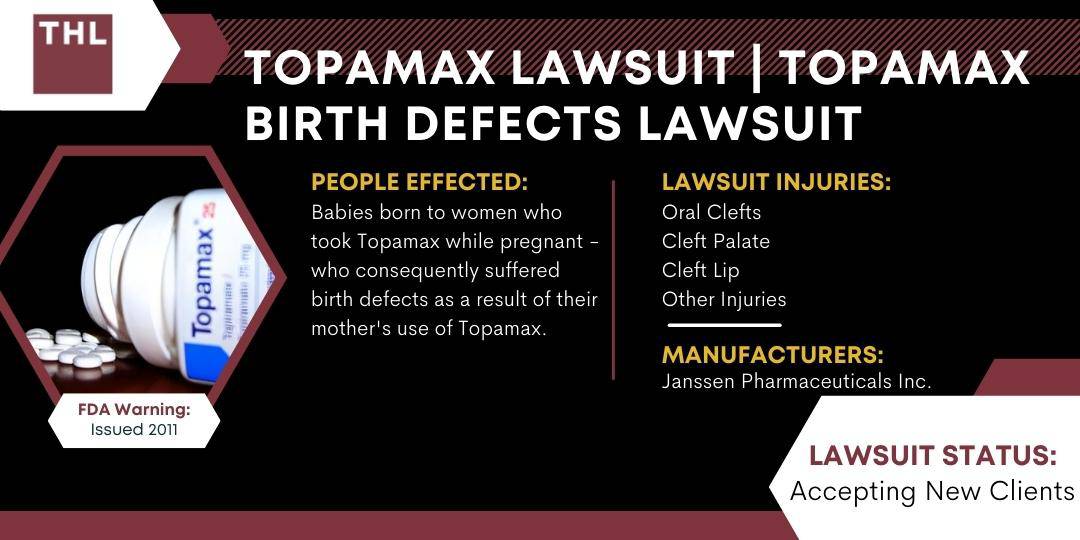 Children of pregnant women who used Topamax, particularly during the first trimester of pregnancy, have an increased risk for the development of oral clefts and other potential birth defects.

If you or a loved one used Topamax or Topiramate prescriptions while pregnant, and the child subsequently developed a cleft palate or other birth defects, you may qualify for a Topamax Lawsuit.

What is Topamax (Topiramate)?

Topamax is a prescribed medication for the treatment of epileptic seizures and other certain types of seizures.

Topamax has also been used to treat bipolar disorder and prevent migraine headaches.

What are the Topamax side effects?

Minor Topamax side effects may include, but are not limited to:

What are the Serious Side Effects of Topamax?

If taken by pregnant women, Topamax can present an increased risk of cleft lip and other oral clefts, as well as other potential birth defects.

There is also scientific research on the incidence of metabolic acidosis resulting from Topamax use.

Metabolic acidosis is the build-up of acid in body fluid, which can lead to several dangerous medical conditions.

Other serious side effects include, but are not limited to:

Though there are risks associated with Topamax use, the potential benefits for patients in treating epilepsy and seizures are enough for a medical professional to prescribe the medication.

If you took Topamax while pregnant, and your child suffered birth defects, you may qualify for a Topamax Lawsuit. 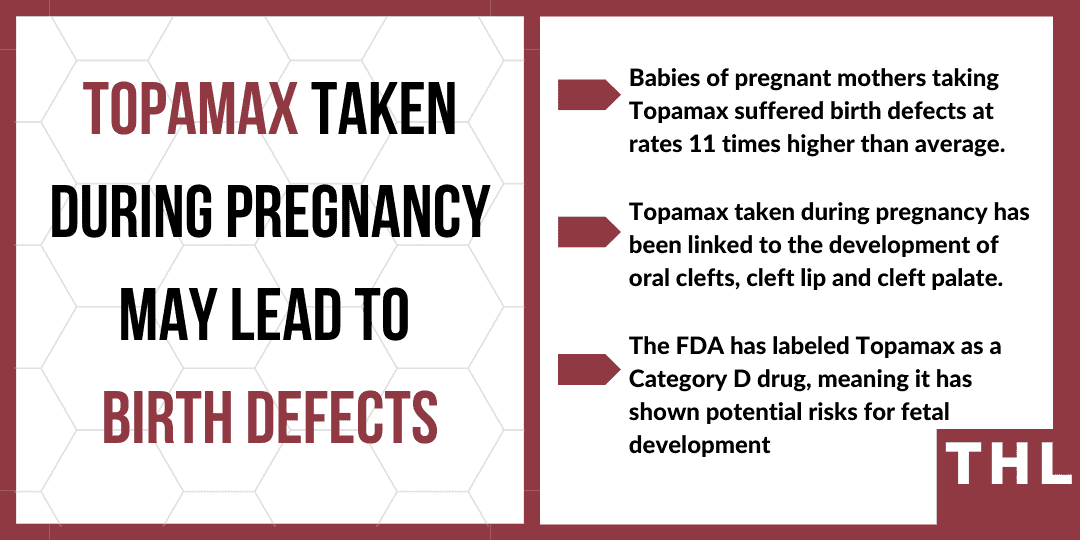 According to a 2008 study published in Neurology, babies of pregnant mothers taking Topamax suffered birth defects at rates 11 times higher than average.

Infants exposed to Topiramate in utero experience an increased risk of developing Oral Clefts (also known as a Cleft Lip or Cleft Palate).

Oral clefts, cleft palate or cleft lip are birth defects that occur when a baby's lip and mouth do not form correctly during pregnancy.

Oral clefts occur early on in pregnancy, even before a woman discovers that she is pregnant.

Cleft palate refers to a split in the roof of the mouth and is sometimes not forwardly visible.

Cleft lip refers to a split in the top lip.

In 2011, the U.S. Food and Drug Administration released a warning on Topamax and the risk of cleft palate in developing babies.

The FDA originally labeled Topamax as a pregnancy category C drug, meaning that clinical trials on animals indicated potential risks for fetal injury, but they were not yet known for humans.

The following guidance was released alongside the FDA Drug Safety Communication on cleft palate risks:

Taking Topamax during pregnancy may be associated with birth defects other than oral clefts and cleft lip/palate.

A study published in the National Library of Medicine found that Topiramate and other antiepileptic drugs such as Zonisamide can lead to low birth weight and small for gestational age (SGA), which is defined as weight below the 10th percentile for gestational age.

Do Seizure Medications or Other Antiepileptic Drugs Pose a Human Fetal Risk?

Seizure medications have been linked to congenital heart defects, urinary tract defects and neural tube defects in babies of mothers who took them while pregnant.

Research on the association between birth defects and seizure medications include the following:

The Johnson & Johnson subsidiaries allegedly engaged in off label promotion of Topamax, hiring outside physicians to visit healthcare professionals and healthcare providers to market the drug for psychiatric conditions.

Filing a Topamax Lawsuit: Do I Qualify?

If you used Topamax to treat seizures and migraines during pregnancy, and your child was born with a cleft lip, cleft palate, or oral clefts, you may qualify for a lawsuit. 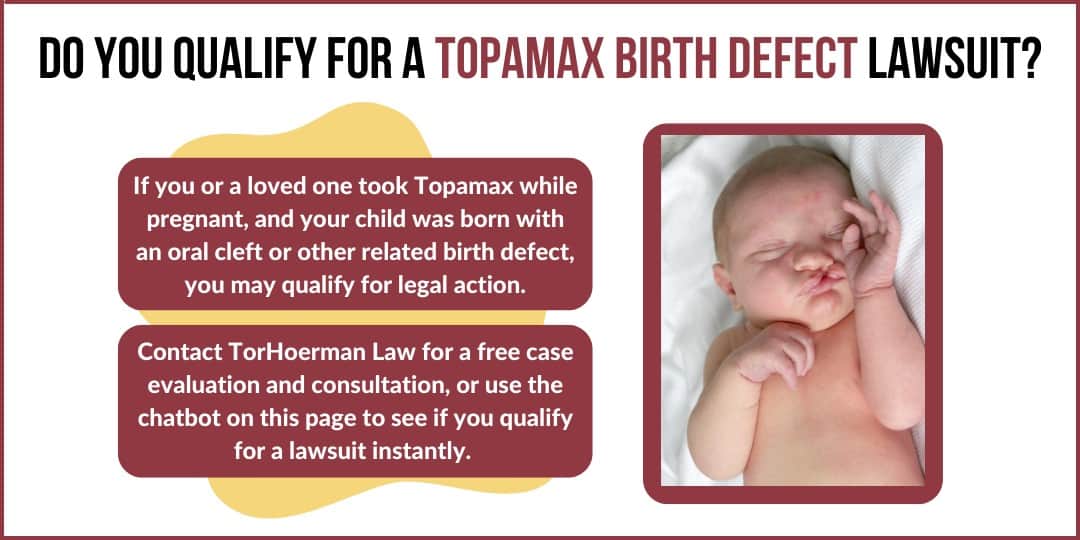 Evidence is key in any personal injury lawsuit, but it is especially important in lawsuits involving dangerous medications.

Evidence in a Topamax lawsuit may include:

Damages are the total losses, both non-economic and economic, that an injured party incurs as a result of their injury.

In many personal injury lawsuits, the injured party will choose to file for both compensatory damages and punitive damages.

After assessing all damages that you incurred, your Topamax attorney will file a complaint demanding compensation to repay your damages.

Common damages in Topamax Lawsuits include:

This can be financially and emotionally costly for children and their mothers.

TorHoerman Law attorneys are accepting clients in all 50 states for Topamax lawsuits.

Our team understands the difficulty of coping with an unexpected medical condition at no fault of your own. 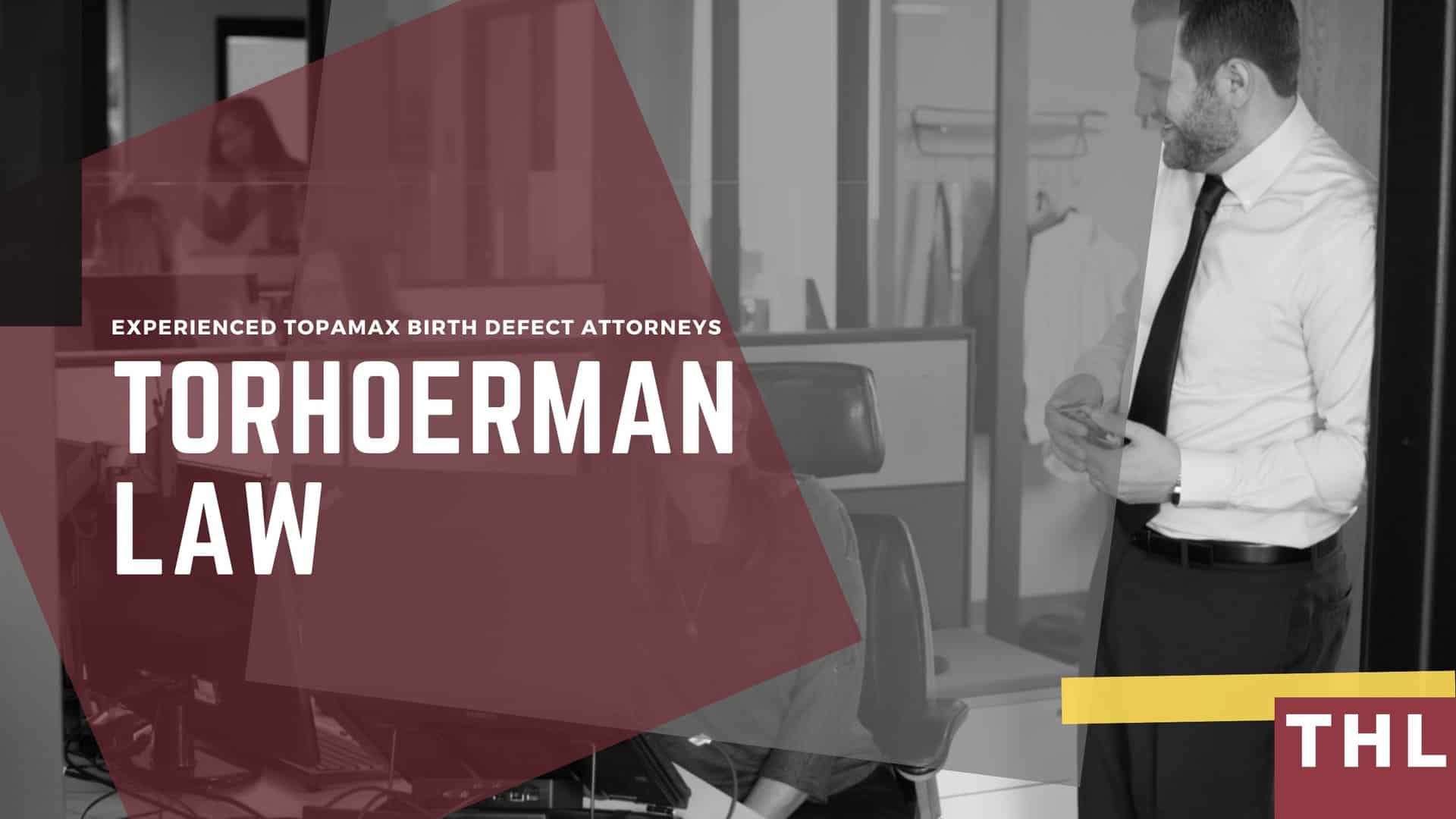 We've secured over $4 billion in compensation for people harmed at no fault of their own.

Our prior results speak to our team's expertise, and we're here to help you get the compensation you're owed for the trauma you've endured.