What To Know Regarding Camp Lejeune Water Contamination Settlement Amounts 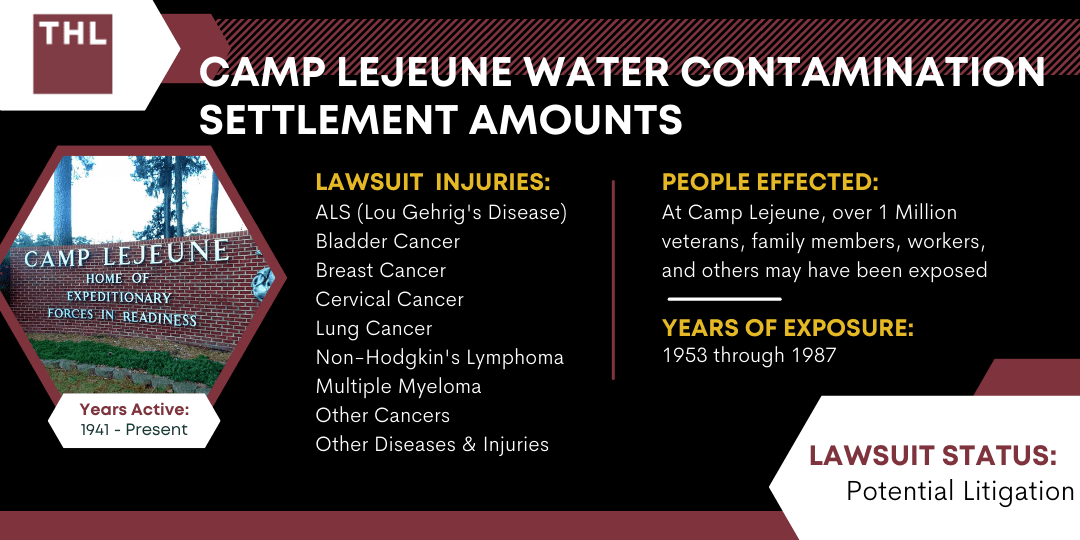 As the Camp Lejeune Water Contamination Lawsuit is in its early stages, it is difficult to know what the average settlement amount will be.

The Camp Lejeune Justice Act has passed both chambers of the House, and will soon be signed into law by President Biden.

More information on the legal process and settlement amounts more generally will become available as the process moves forward.

What are the Average Camp Lejeune Water Contamination Settlement Amounts?

The settlement amount for each individual case will differ based upon the injuries suffered, conditions diagnosed, time spent at the base, and more.

Depending on injuries suffered, conditions diagnosed, and evidence available, individual settlement amounts for exposure to contaminated water at Camp Lejeune could be significant.

Again, at this stage, it is too early to put a number to the average settlement amount for a Camp Lejeune Water Lawsuit.

Visit this page for more updates on settlement amounts for Camp Lejeune lawsuits as the information becomes more widely available. 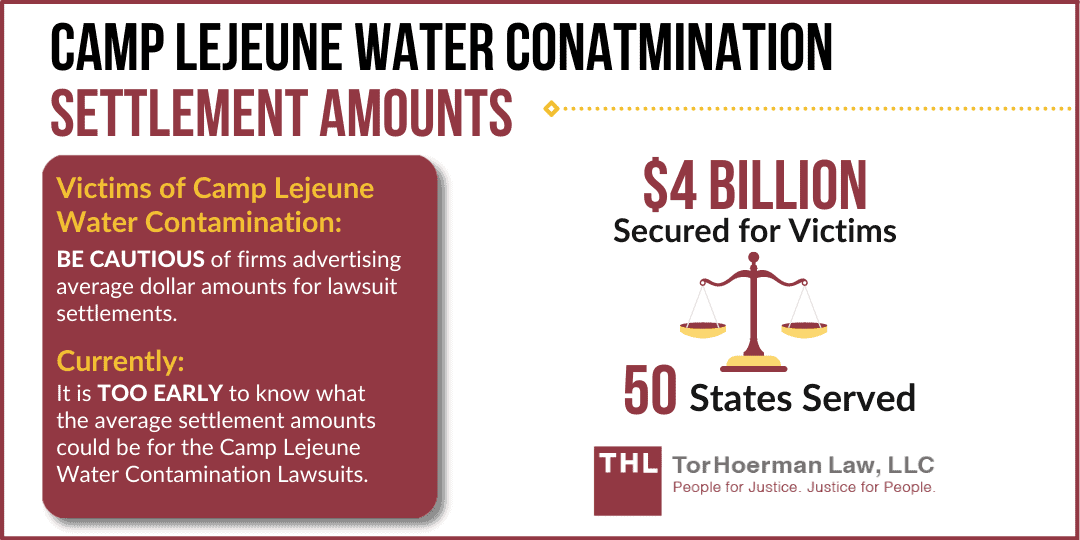 The Congressional Budget Office (CBO) issued a cost estimate for the Honoring Our PACT Act, totaling the 10-year overall cost of the bill to be $667 billion.

The CBO estimated that Camp Lejeune’s settlement payouts and legal expenses will account for $6.7 billion of that figure.

This is strictly the information we have at this moment as the Camp Lejeune Justice Act is soon to be signed into law.

Scroll to the bottom of this page for a full comprehensive breakdown of the budget allocated in the Honoring Our PACT Act of 2022.

Water contamination is a huge issue in the United States, and when possible, lawyers have fought to hold those responsible for endangering the public accountable for their actions.

Although legal action against governmental agencies for water contamination has not been undertaken before, there have been numerous significant settlements reached with companies that have contaminated water sources:

Other Military Base Lawsuits

While it has been difficult to hold the Federal Government or Military agencies, such as the Marine Corps in the case of Camp Lejeune, accountable for their actions, private contractors have faced legal action for exposing veterans and their family members to toxic substances.

A few examples of private contractors being held accountable for damages caused to military veterans include:

The Federal Government assembled a task force to study and identify military bases across the country where water contamination has been found.

This list of bases where per- and polyfluoroalkyl substances (PFAS) have been found in groundwater may just be the tip of the iceberg in terms of toxic substances leaking into drinking water supplies.

In late 2021, it was reported that underground fuel storage tanks leaked approximately 19,000 gallons of jet fuel into drinking water wells at the Navy’s World War II era Red Hill Facility. The Navy was ordered by the Hawaii State Government to halt operations.

At Fort Ord in California, military exercises and a lackadaisical approach to disposing of dangerous chemicals resulted in rampant water contamination.

Veterans exposed to the toxic water at Fort Ord were diagnosed with cancer and other life-altering and deadly health conditions. 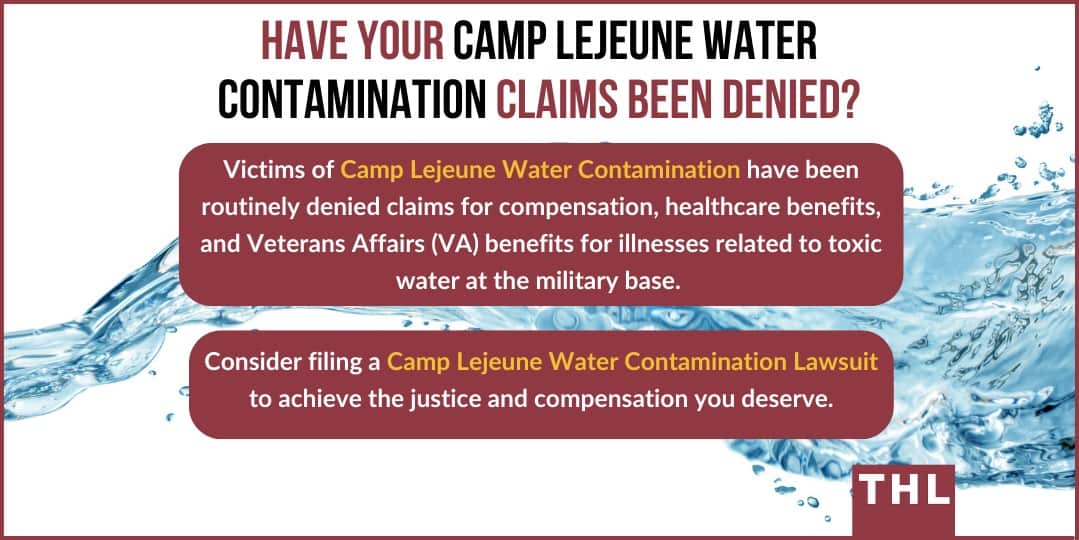 Previously, the U.S. Navy denied all civil claims related to Camp Lejeune water contamination in order to “free everybody to take their own course of action.”

Or, in other words, to avoid responsibility for exposing our nation’s bravest to some of the world’s most toxic water.

According to Reveal, an investigative news outlet, the VA approved only about 25% of claims for Camp Lejeune water contamination. 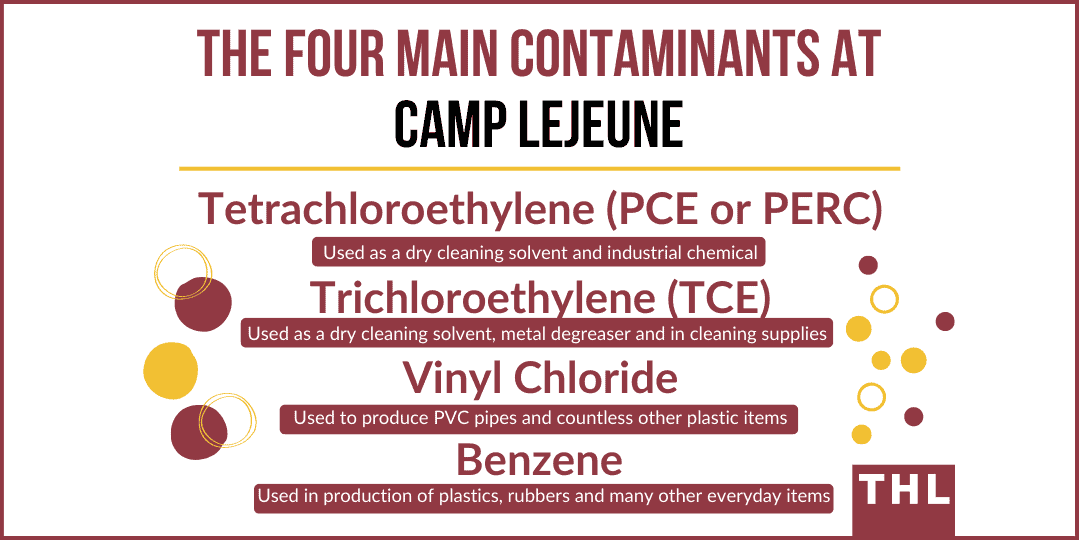 Toxic chemicals, such as Tetrachloroethylene (PCE), Trichloroethylene (TCE), Vinyl Chloride, Benzene, and up to 70 other contaminants leaked into the Camp Lejeune water supply at unregulated levels.

You can learn more about the dangerous chemicals present, and what caused the contaminated water supply at Camp Lejeune, here.

The main sources of the water contamination at Camp Lejeune include the following water treatment plants:

An off base dry cleaner near Tarrawa Terrace Treatment Plant was the main source of PCE and TCE contamination.

Scientific and medical evidence from organizations such as the Agency for Toxic Substances and Disease Registry (ATSDR) have identified the risks involved with Camp Lejeune water contamination.

Veterans, family members, civilian workers, and others exposed to contaminated water at Camp Lejeune have developed cancer and life-altering health conditions including: 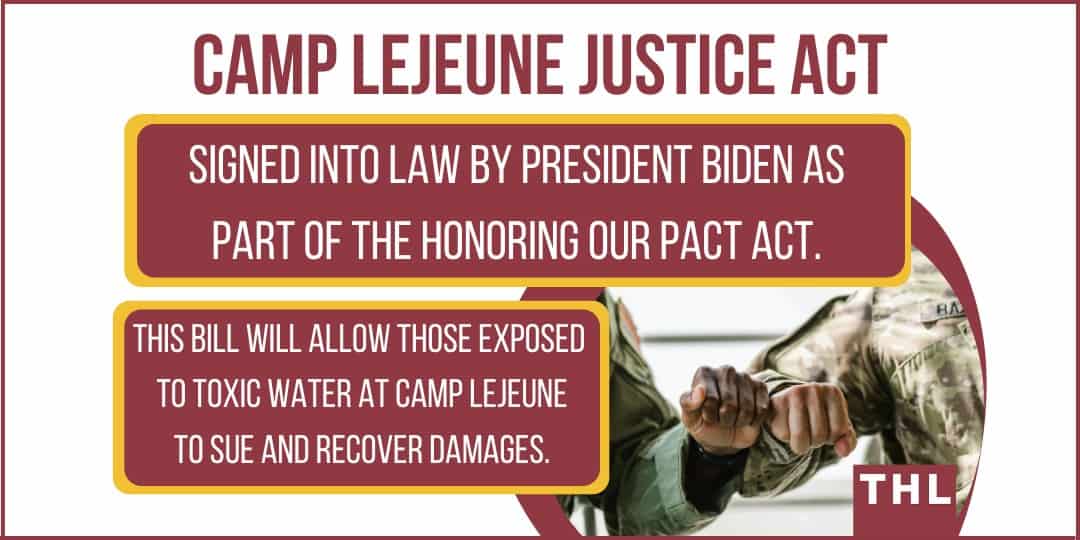 The Camp Lejeune Justice Act is a new piece of legislation included in the Honoring Our PACT Act, which was just recently passed by the Senate and Congress.

The Camp Lejeune Justice Act allows those exposed to toxic substances in the water at Camp Lejeune between 1953 and 1987 the ability to sue and recover damages.

Countless Camp Lejeune victims lost their lives, and legal recourse has been difficult due to a North Carolina statute that barred legal action against governmental agencies.

The Camp Lejeune Justice Act overrides those restrictions and will allow victims to pursue compensation and new health benefits for toxic exposure.

The PACT Act is estimated to help up to 3.5 million veterans, including those exposed at Camp Lejeune, in military burn pits, and in countless other situations where veterans were exposed to toxic chemicals. 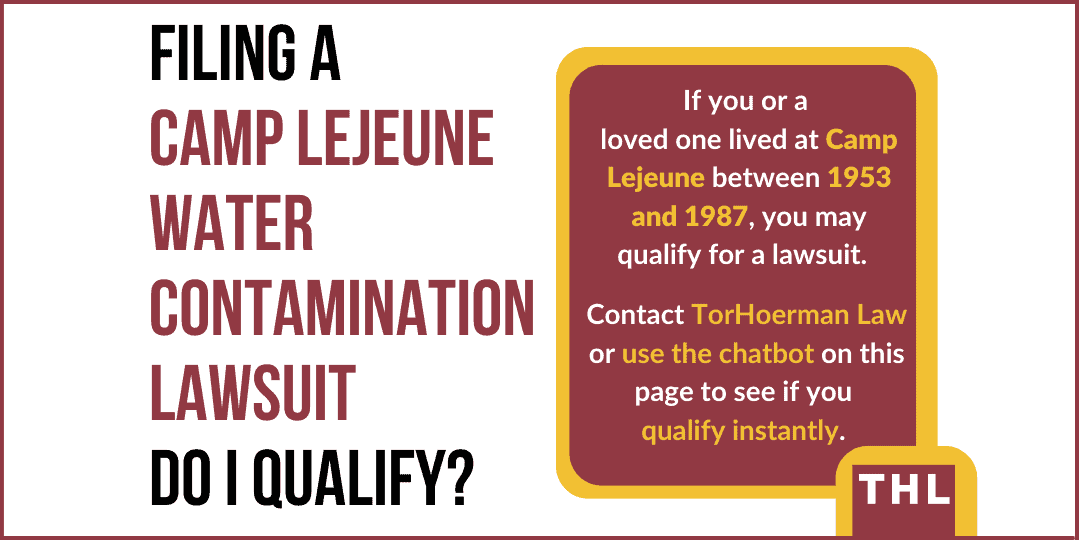 In order to give yourself the best chance at an adequate settlement relative to your injuries and exposure, it’s important that you collect all evidence relevant to your case, and have an attorney help you determine the damages incurred.

Evidence is the crucial basis for all lawsuits, but it is especially important for former Camp Lejeune residents seeking compensation.

Evidence for a Camp Lejeune Water Contamination Lawsuit may include:

When you have gathered pieces of key evidence, our Camp Lejeune Lawyers will help you to refine your case and assess damages.

Damages are the total amount the defendant is liable to pay to the plaintiff to compensate for the damage that they have caused.

Damages in a Camp Lejeune water contamination lawsuit may include:

TorHoerman Personal Injury Lawyers are dedicated to achieving justice and rightfully deserved compensation for those exposed to toxic water at Camp Lejeune.

Contact us for a free legal consultation or use the chatbot on this page for a free case evaluation to see if you qualify for a lawsuit instantly.

Any confidential or sensitive information you provide, such as medical records authorizations, is safe with us.

We value the attorney client relationship and will ensure that your information and claims are kept safe and secure. 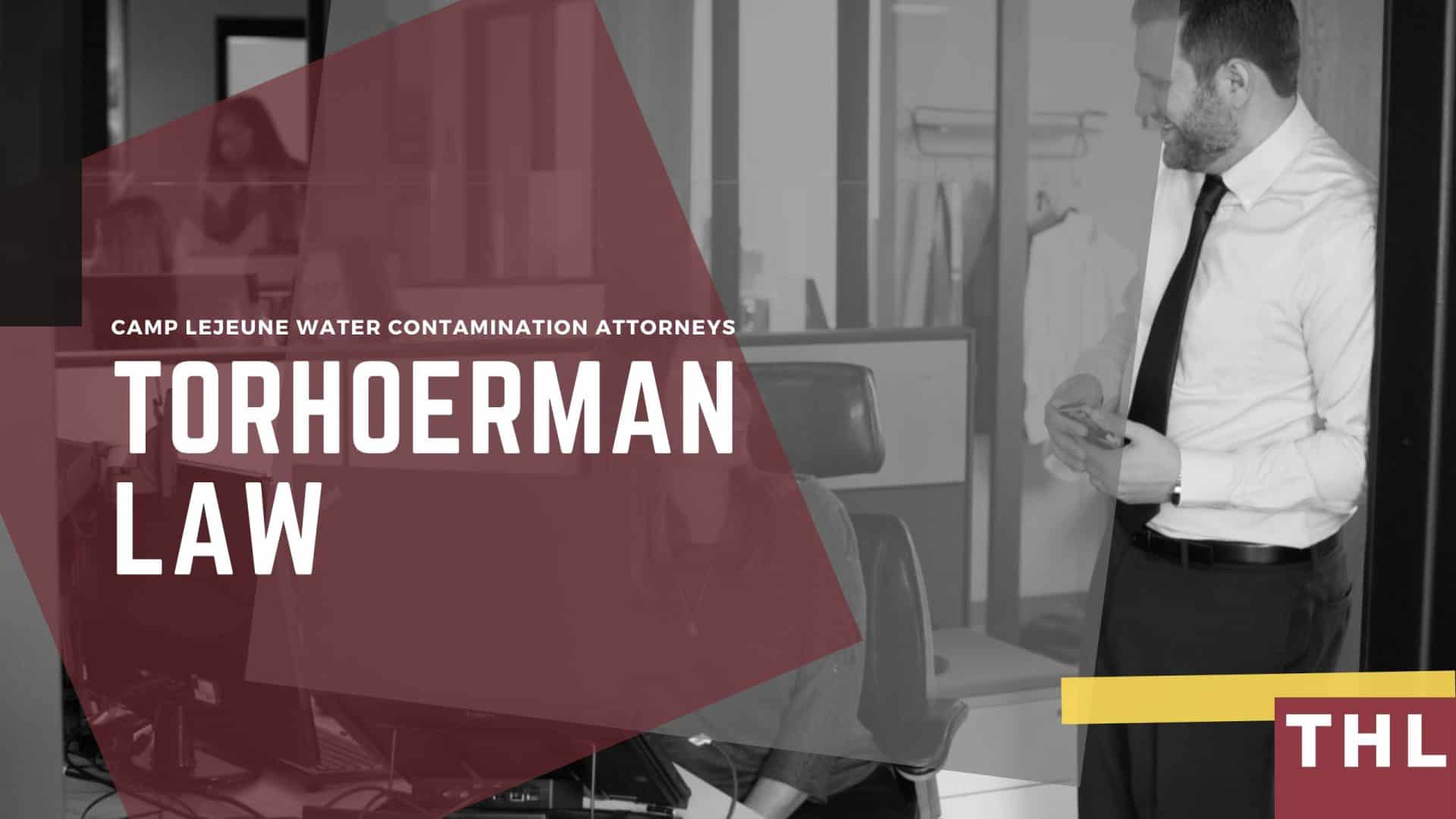