Tylenol (Acetaminophen), a popular fever and pain medication used by millions across the world, has been linked to Autism Spectrum Disorder (ASD), Attention Deficit Hyperactivity Disorder (ADHD), and other neurodevelopmental disorders in children of women who took the pain relief drug while pregnant.

Tylenol Autism Lawsuits allege that Tylenol and generic acetaminophen are linked to an increased risk of Autism Spectrum Disorder (ASD). 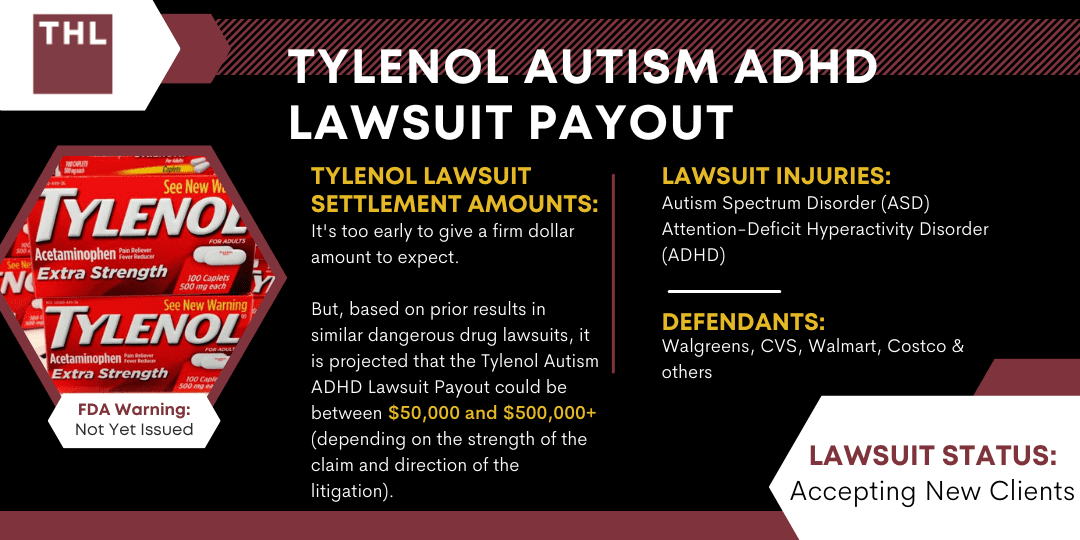 Our attorneys are reviewing Tylenol Autism Lawsuits and strategizing how the multidistrict litigation should be undertaken.

If you or a loved one used Tylenol or Acetaminophen while pregnant, you may be eligible to file a Tylenol Autism ADHD Lawsuit.

You can also use the chatbot on this page to see if you qualify for Acetaminophen autism lawsuits instantly.

What Are the Average Tylenol Autism Lawsuit Settlement Amounts?

The Tylenol Autism Lawsuits are being consolidated in multidistrict litigation, and average settlement amounts will likely be known in the next year.

It’s currently too early to give a solid dollar amount estimate for Tylenol Autism lawsuit settlements.

However, based on prior results in similar dangerous drug lawsuits, it is projected that Tylenol Autism ADHD Lawsuit Payouts could be between $50,000 and $500,000+ depending on the strength of the claim and direction of the litigation.

These estimates are only projections based on prior results in dangerous drug lawsuits. These estimated settlement amounts are not guarantees.

Settlements for mothers who took Tylenol and whose children were subsequently diagnosed with Autism Spectrum Disorder (ASD), Attention Deficit Hyperactivity Disorder (ADHD), or other developmental disorders will depend on a number of factors.

Factors that can impact settlement amounts include quality of evidence, severity of diagnoses, damages claimed, and more.

Can Taking Tylenol While Pregnant Cause Autism or ADHD?

Are there Lawsuits for Generic Acetaminophen?

These manufacturers include Walgreens, Walmart, Costco, CVS, and other big-box stores that produce generic acetaminophen.

Besides Autism Spectrum Disorder (ASD) and Attention Deficit Hyperactivity Disorder (ADHD), What Neurological Disorders Have Been Linked to Acetaminophen Use During Pregnancy?

The children of pregnant women who took acetaminophen have been diagnosed with Autism Spectrum Disorder (ADHD) and Attention Deficit Hyperactivity Disorder (ADHD).

Other health risks associated with Acetaminophen use during pregnancy potentially include:

A research study published by Johns Hopkins University found that prenatal exposure to Tylenol or generic acetaminophen may potential lead to neurological disorders and developmental disorders in children.

The researchers used data from the Boston Birth Cohort to examine the link between prenatal acetaminophen exposure and ASD.

They collected umbilical cord blood from 996 births and measured the amount of acetaminophen and two of its byproducts in each sample.

The researchers classified the amount of acetaminophen and its byproducts in the samples into thirds, from lowest to highest.

Compared to the lowest third, the middle third of exposure was associated with about 2.26 times the risk for ADHD.

The highest third of exposure was associated with 2.86 times the risk.

Similarly, ASD risk was higher for those in the middle third (2.14 times) and highest third (3.62 times).

The authors conclude that their results support earlier studies linking acetaminophen exposure in utero to an increased risk for ASD and ADHD.

They note that their study has several limitations, including its reliance on self-reported acetaminophen use, which may be subject to recall bias.

However, they say that their study adds to the growing body of evidence linking prenatal acetaminophen exposure to neurodevelopmental disorders such as ASD and ADHD.

“Paracetamol use during pregnancy - a call for precautionary action” is a September 2021 Consensus Statement published in Nature Reviews Endocrinology that provides a warning to the public of the many potential risks associated with Acetaminophen use in pregnancy.

Researchers involved in the consensus statement represent some of the top Universities across the world, including the following:

This new study builds off decades of scientific research conducted on birth cohorts and mother-child pairs.

This study summarizes evidence which chronicles the usage patterns, diagnoses, health impacts, and more over long periods of time relating to the use of Acetaminophen during pregnancy.

The civil lawsuit against drug manufacturers for prenatal exposure to Acetaminophen is going forward.

MDL 3043: Acetaminophen - ASD/ADHD Products Liability Litigation is centralized in the US District Court: Southern District of New York. Eighteen (18) plaintiff motions were officially consolidated when the MDL was created.

Many more cases are expected to be centralized into the civil lawsuit in the coming months. 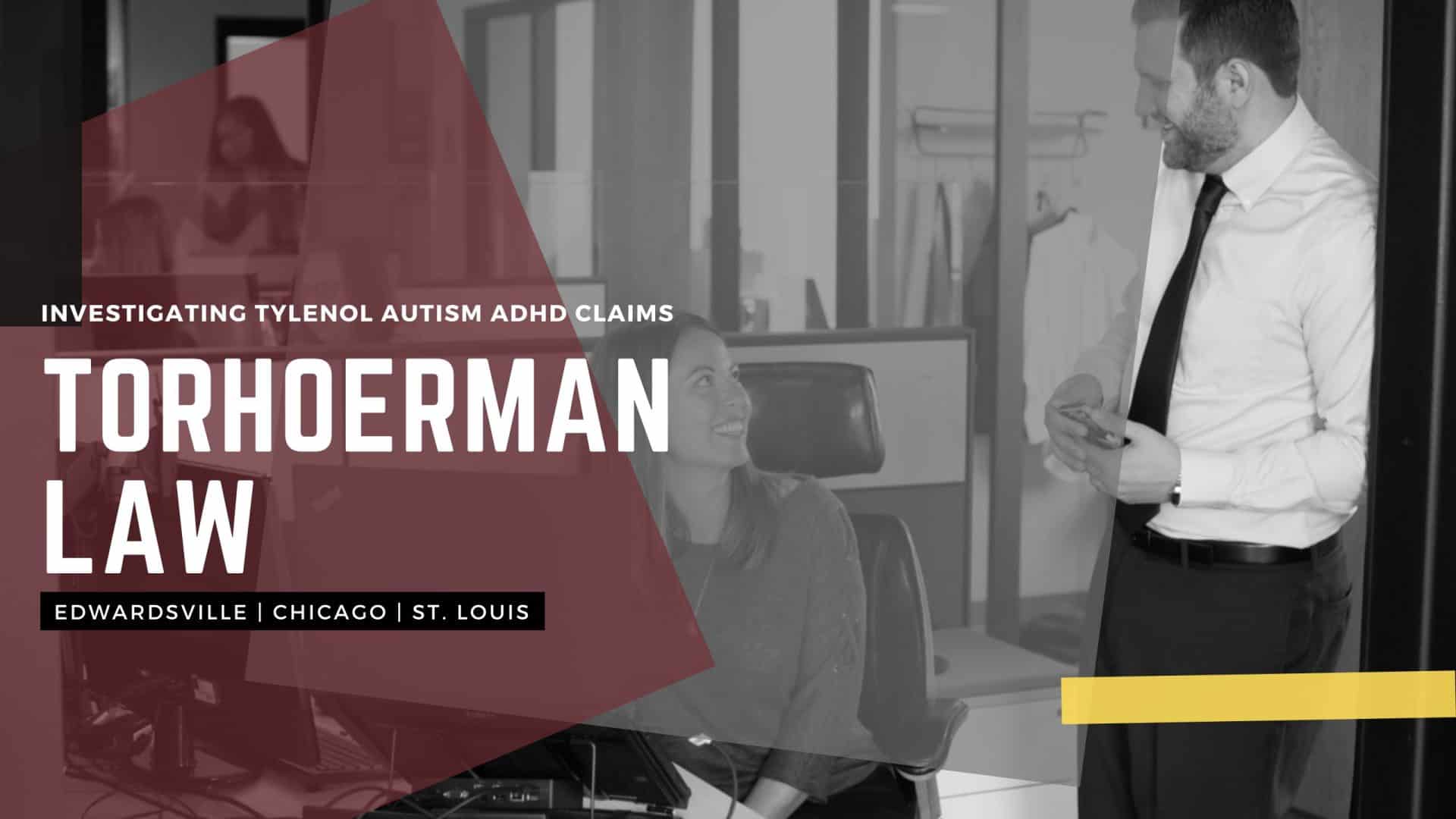 We are focused solely on competent legal representation, relationship building, and full financial recovery for your injuries and damages.