Military members, family members and civilian workers exposed to these dangerous chemicals have been diagnosed with numerous adverse health effects including several types of cancer and other diseases. 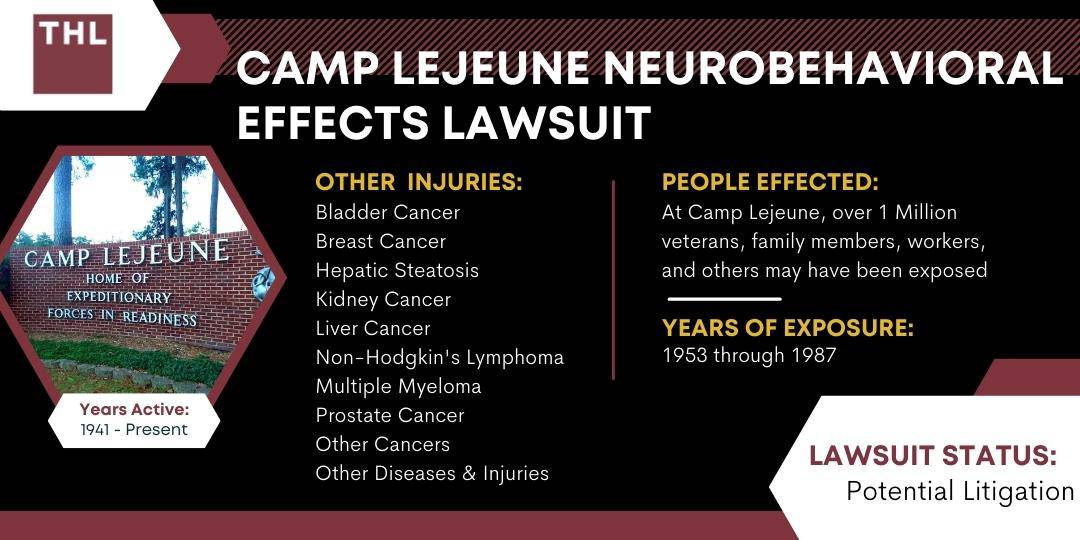 If you’re considering filing a Camp Lejeune Neurobehavioral Effects Lawsuit, you likely have some questions.

Below, we discuss the water contamination disaster at Camp Lejeune and evidence linking these substances to neurobehavioral effects, nervous system impacts and other behavioral disorders.

If you were at Camp Lejeune between 1953 and 1987, and subsequently developed neurobehavioral effects, contact TorHoerman Law for a free case evaluation or use the chatbot on this page to see if you qualify to file a Camp Lejeune Liver Cancer Lawsuit instantly.

What Chemicals Were in Camp Lejeune Water?

There were a number of dangerous chemicals present in the water at Camp Lejeune. 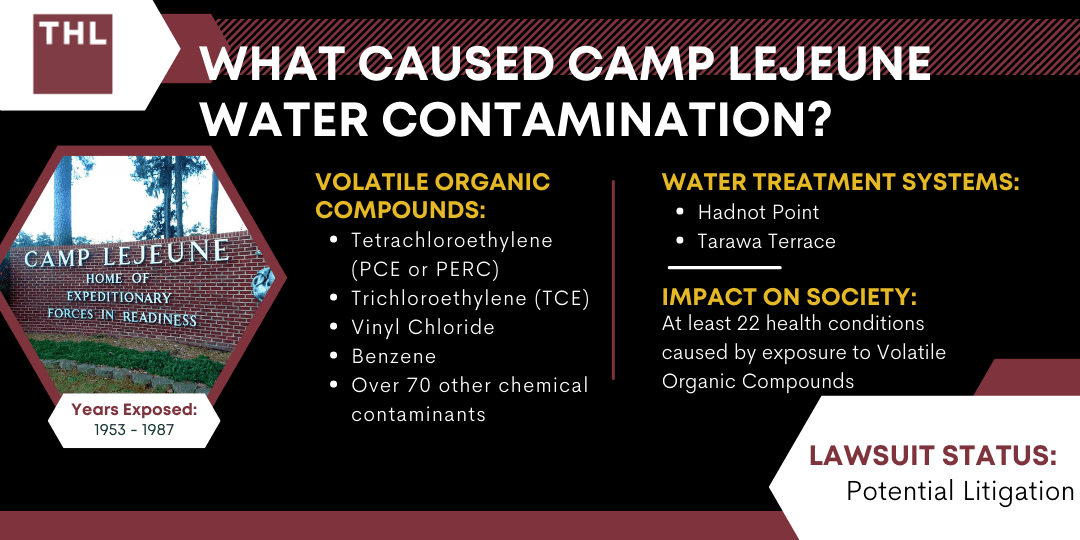 Visit this page to learn more about what was in the water at Camp Lejeune.

As mentioned before, neurobehavioral effects at Camp Lejeune have been primarily linked to PCE and TCE.

The Camp Lejeune Justice Act is a new piece of legislation that is soon to be signed into law by President Biden.

In the past, several bills were introduced to address the issue at the North Carolina military base, but none have had any widespread impact for victims and families.

How To File A Camp Lejeune Cancer Lawsuit

TorHoerman Law is accepting clients for the Camp Lejeune Lawsuit in all 50 states.

An increased risk of neurobehavioral effects and other behavioral disorders has been identified by medical professionals who’ve studied the contaminated water at Camp Lejeune. 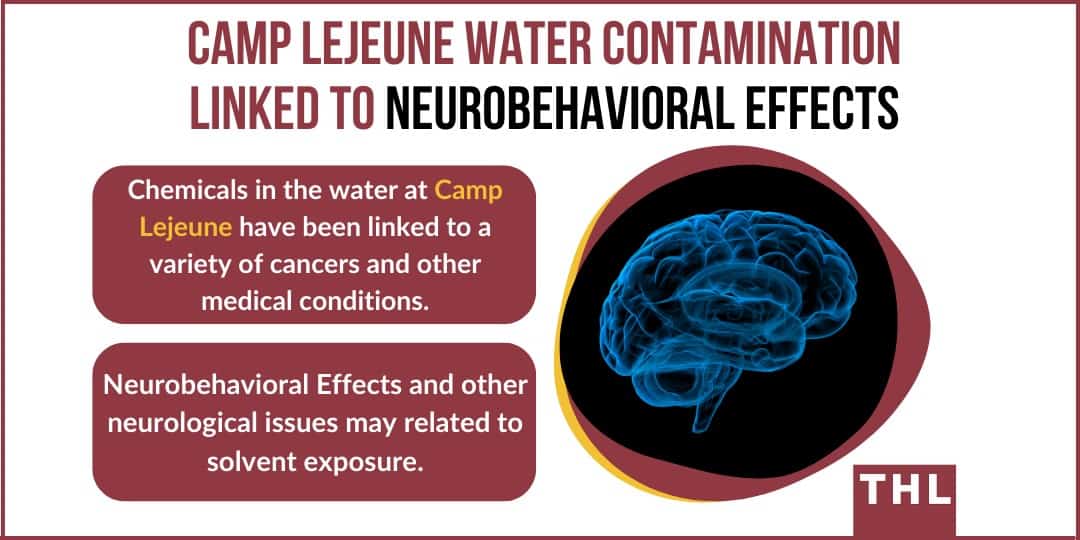 The Agency for Toxic Substances and Disease Registry (ATSDR) also found that neurobehavioral effects, Parkinson’s disease, cancers and other health conditions were common diagnoses amongst former residents of Marine Corps Base Camp Lejeune.

Neurobehavioral impacts are especially prevalent in children that lived at Camp Lejeune, who are now adults and dealing with related symptoms over the course of their lives.

What Chemicals in the Camp Lejeune Drinking Water are Linked to Neurobehavioral Effects?

The NRC concluded that organic solvent exposure, particularly tetrachlorethylene (PCE or PERC) and trichloroethylene (TCE) contamination, is likely to blame for the higher rates of neurobehavioral effects in former Camp Lejeune residents.

The toxic solvents that contaminated drinking water at Camp Lejeune most likely originated from an off base dry cleaner located near Tarawa Terrace Water Treatment Plant.

Neurobehavioral Effects Experienced by Those Stationed at Camp Lejeune

Current VA clinical guidance does not include neurobehavioral effects overall on its list of presumptive health conditions related to Camp Lejeune, but does list Parkinson’s Disease.

It’s important to note that neurobehavioral effects, as classified in the original NRC report, are described as:

Neurobehavioral effects have been experienced by those exposed to contaminated water as adults, children, and in-utero (unborn children).

The variety of such neurobehavioral symptoms linked to contaminated drinking water at Camp Lejeune have resulted in life impacts such as loss of consortium and enjoyment of life, lost earning ability or wages, major medical expenses for health monitoring and testing, and more.

The broad nature of neurobehavioral effects and their diagnoses have made it difficult for victims to identify the source of their health conditions.

Testing for Neurobehavioral Effects and Their Relation to Chemical Exposures

These neurobehavioral effects and their links to certain toxic chemicals are categorized and able to be tested for by multiple health agencies.

Neurotoxicity testing has been established for decades, with an Environmental Protection Agency (EPA) document establishing guidelines for tests and how they should be conducted.

It has been noted that the rate at which new industrial chemicals are introduced for use outpace the resources for adequate testing.

Preceding the EPA guidelines on neurotoxicity testing was the 1983 World Health Organization Neurobehavioral Core Test Battery (WHO-NCTB), which aimed to set a standard for the study of chemical exposures and their relation to certain neurobehavioral deficits.

If you believe you’re suffering from neurobehavioral effects as a result of toxic exposure, consult with your doctor on the best route forward in terms of testing and diagnosis.

If you or a loved one lived at Camp Lejeune for 30 days or more between 1953 and 1987, and have subsequently experienced neurobehavioral effects or neurobehavioral deficits, you may qualify for a lawsuit.

With the Senate passage of the PACT Act, and the imminent signing of the bill into law by President Biden, Camp Lejeune Water Contamination Lawsuits are able to be filed by any person exposed to contaminated water at the Marine Corps base between 1953 and 1987. 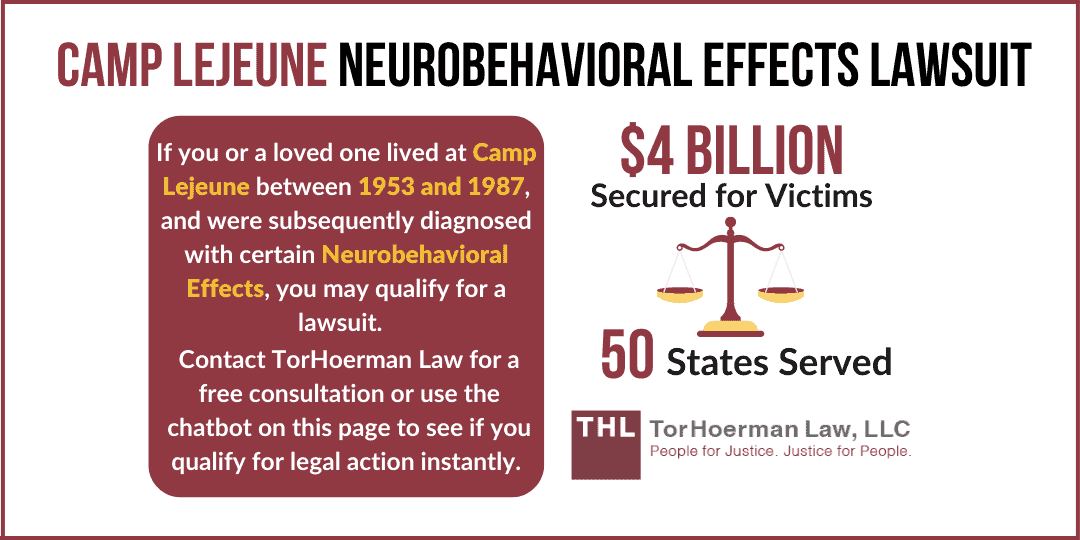 If you, any family members or loved ones drank the toxic water at Camp Lejeune between these years, and meet other certain criteria, you may qualify to file a Camp Lejeune Lawsuit.

Contact TorHoerman Law for a free consultation or use the chatbot on our website for a free case evaluation to see if you qualify instantly.

We thank the brave veterans and active duty military members for their service to our country. Now let us serve you.